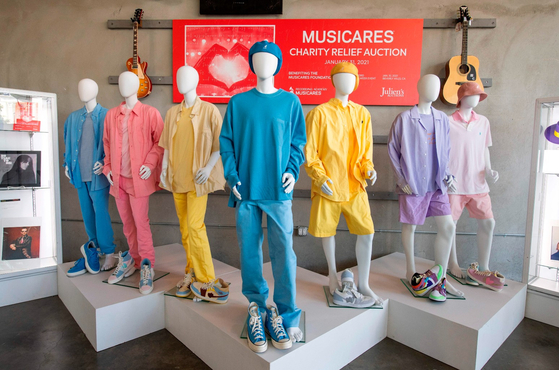 
A set of outfits worn by members of boy band BTS in the music video for its massive hit single "Dynamite" was sold for $162,500 at MusiCare's Charity Relief Auction hosted by Julien's Auctions on Jan. 31.

According to MusiCare, the final sale price was eight times higher than initially estimated.

The set was bought by Japanese art collector Yusaku Maezawa and YouTuber Hikakin.


The outfits consist of pastel-toned shirts, trousers, hats, T-shirts and sneakers that the seven members wore in the beginning and closing parts of the "Dynamite" music video.

"Dynamite" was released in August last year and brought the band its first No. 1 spot on Billboard's Hot 100 singles chart as well as a Grammy nomination for the 63rd awards event that will take place on March 14.

BTS has previously sold microphones used by the members for $83,000 at the MusiCare Auction in January last year.