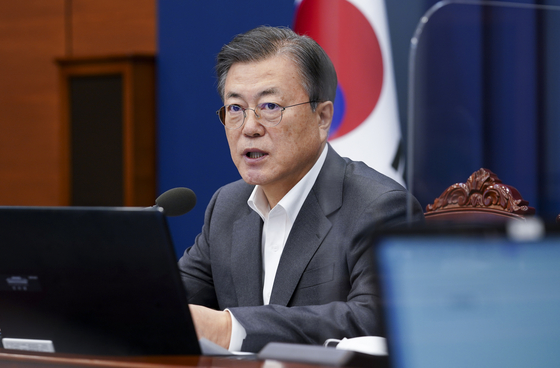 President Moon Jae-in in a Blue House meeting on Monday responds to allegations raised by the opposition that he proposed to build a nuclear power plant for North Korea in his 2018 summit with Kim Jong-un. [YONHAP]


President Moon Jae-in on Monday delivered a riposte to allegations he offered to build North Korea a nuclear power plant in years past, warning the opposition not to resort to politics of a bygone era to foment divisions during a time of crisis.

In an apparent reference to the opposition’s attacks, Moon in a Blue House meeting urged politicians to refrain from “regressing politics” with tactics like “relics of an old era” that should be discarded.

The rare rejoinder from the normally taciturn president was a response to mounting denunciations by the main opposition People Power Party (PPP) regarding the claim that a nuclear power plant was one of the economic offers Moon made to North Korean leader Kim Jong-un during or after their first summit at Panmunjom in April 2018.

Plans to build such a reactor were included among 530 recovered documents that had been deleted from computers at the Ministry of Trade, Industry and Energy before a government audit in December 2019.

The alleged cover-up fed speculation that the Moon administration proposed the plan to Pyongyang as leverage to improve inter-Korean ties.

Seizing on the issue as a chance to lambast the administration for indulging the North — a favorite line of attack for Korea’s conservatives — PPP Chairman Kim Chong-in on Friday accused the Moon government of engaging in “acts benefitting the enemy” and called for a prosecutorial investigation of the Blue House.

PPP floor leader Rep. Joo Ho-young on Monday followed up by calling for a parliamentary audit on the cover-up issue to prove whether the Moon administration created the plan to help the North after the summit.

The Trade Ministry on Sunday argued the document was just an idea meant for internal circulation.

Casting doubt on the Trade Ministry’s explanation, conservative lawmakers also demanded the Blue House release the contents of a memory stick Moon gave Kim during the April summit that contained a blueprint for inter-Korean economic cooperation, which the PPP claims may have included the nuclear reactor proposal.

The ruling Democratic Party (DP) fended off the claims equally vigorously, calling out the opposition for its tactics.

In a radio interview with broadcaster TBS Monday, Minister of Unification and four-term DP lawmaker Lee In-young flatly denied there was any nuclear plant deal on the table with the North at the summit, stressing no evidence of such a plan was found in the government’s official economic blueprint for inter-Korean cooperation.

“I can’t help but speculate [the opposition is making such a claim] because of the elections,” Lee said, suggesting the PPP was playing up the narrative to generate public discontent ahead of the Seoul and Busan mayoral by-elections in April.

DP Rep. Yoon Young-chan, who served as Moon’s communications secretary during the summit, in a radio broadcast on CBS hinted the ruling party could disclose the contents of the thumb drive Moon gave Kim, in order to dispel the controversy.

While echoing government claims that there was no mention of a nuclear reactor in the blueprint, Yoon suggested the inter-Korean plans could have raised the idea of building a hydroelectric or coal-powered power plant in the North.