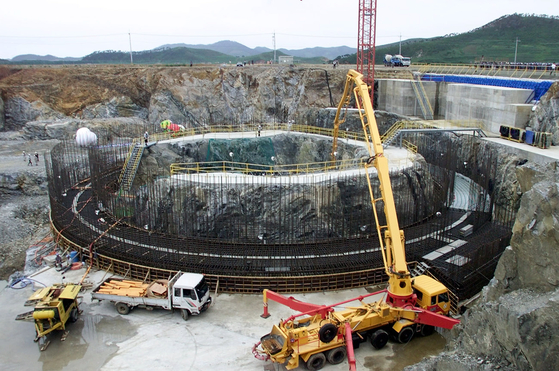 In this file photo, workers pour concrete at a construction site to build nuclear reactors in the North Korean village of Kumho, near Sinpo, South Hamgyong, on Aug. 7, 2002. Officials of the Korean Peninsula Energy Development Organization (KEDO) gathered in the village on North Korea's eastern coast for the ceremony marking the start of work on $4.8-billion nuclear reactors being built under a 1994 pact. The construction was terminated in 2006. [REUTERS]


Within a week of President Moon Jae-in's first summit with North Korean leader Kim Jong-un in 2018, the government drafted plans to offer energy assistance to the North including the possibility of building it a nuclear plant.

But those documents were deleted from the Energy Ministry's computer on the eve of a special probe in 2019, a government source told the JoongAng Ilbo on Sunday.

The revelation of the Moon administration's controversial ideas to offer energy aid to the North is a surprise by-product of an investigation into some civil servants' alleged attempt to obstruct the Board of Audit and Inspection's (BAI) probe of the Ministry of Trade, Industry and Energy in 2019.

In October 2020, the BAI announced that the government shut down the country's second-oldest nuclear reactor, Wolsong I, earlier than scheduled based on a faulty assessment that unfairly underestimated the economic advantage of keeping it alive. Shutting Wolsong I jibed with Moon's policy to wean Korea off nuclear power because it is dangerous.

The BAI said its audit took an extraordinarily long period — one year — due to resistance from the ministry. It said some ministry workers tried to obstruct the probe by deleting internal documents, and the Daejeon District Prosecutors' Office later investigated the allegation and indicted three ministry officials in December 2020 on charges of purging government records.

While the probe was largely focused on who deleted the files and if there were any orders from higher-ranking officials, such as the minister or a presidential aide, a surprise discovery was made last week that more politically volatile documents were deleted with the Wolsong-1 records.

Attached to the indictment filed with the Daejeon District Court was a list of more than 500 digital files deleted from ministry computers, and local media started reporting last week that some of the deleted files had titles suggesting a project to offer nuclear energy to North Korea.

"The ministry created a report entitled 'Plan to push forward a nuclear plant's construction in North Korea' in May 2018 and deleted it [before the December 2019 audit]," the government source informed about the investigation told the JoongAng Ilbo.

"That particular file contained three scenarios including a plan to build a nuclear reactor on the site of the [now scrapped] light-water reactor project of the Korean Peninsula Energy Development Organization [KEDO]," the source said, "Building a nuclear plant inside the demilitarized zone or completing the Shin Hanul-3 and 4 reactors in the South and sending electricity to the North were the two other scenarios."

The first plan to build a nuclear plant in the North is an echo of an unsuccessful international project from the 1990s. The 1994 Geneva Agreed Framework between the North and the United States called for KEDO, comprised of Korea, Japan and the United States, to build two light-water reactors on a site north of Sinpo, South Hamgyong Province, on the east coast of the North. The idea was to offer the North reactors that could not be used for atomic weapons in return for its agreement to freeze and ultimately dismantle its nuclear programs. That agreement, however, was terminated in 2006 after the revelation in 2002 that the North was clandestinely operating a highly enriched uranium program.

The third idea of sending electricity from the South contradicts the Moon administration's nuclear phase-out policy. In 2015, the Park Geun-hye administration approved a plan to build two new reactors — Shin Hanul 3 and 4 — in Hanul Nuclear Power Plant in North Gyeongsang. Construction was stopped in October 2017 after Moon took office and announced the country would stop building new reactors.

The Energy Ministry claimed that a junior-level civil servant — the lowest of the three ministry workers indicted on charges of deleting government records — had created the controversial nuclear plant construction plan in the North, but it was just an idea.

"The report explored various possibilities without specific implementation plans," Shin Hee-dong, spokesman for the ministry, said Sunday. "It was just an internal document that was never pursued any further. It was never pushed forward as an official government policy, and it's not true that the government secretly created a plan to build a nuclear plant in the North." 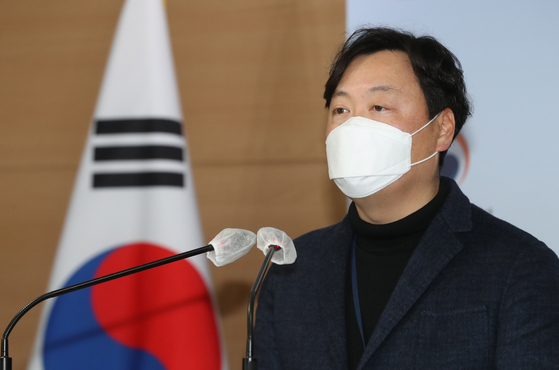 Shin Hee-dong, spokesman for the Ministry of Trade, Industry and Energy, gives a briefing on Sunday. [YONHAP]


Shin said the ministry brainstormed various ideas to prepare for the possibility that the two Koreas would resume economic cooperation after the first summit between Moon and Kim on April 27, 2018. "The North Korea nuclear plant plan was just one of the ideas," he said.

The controversial plan to build the nuclear plant in the North was created on May 14, 2018. An updated version was created the next day.

On May 24, 2018, North Korea demolished its Punggye-ri nuclear testing site, and Moon had his second summit with Kim two days later. On June 12, Kim had his historic summit with U.S. President Donald Trump in Singapore.

Many questions linger about the three possible plans to offer energy to the North.

It was unclear why the ministry considered nuclear power aid for the North as Moon was pushing forward his nuclear phase-out policy.

It is also unclear why the ministry kept the North Korea project files for 19 months if the ideas were shelved at the initial stage. The files were stored in a secure computer of the ministry's Nuclear Power Industry Policy Department, not the computer of the junior public servant who authored the report.

"It does not make sense for a junior-level public servant to plan nuclear plant construction in the North, which would cost trillions of won, and then drop it," said a former high-ranking official.

The ministry said the plan to build a nuclear plant in the North was shelved because of the uncertainty of the North's denuclearization. Diplomats say that explanation is lame because offering a non-military reactor in return for the North's dismantlement of nuclear arms already failed once before.

"If the ministry reviewed the possibility of building a nuclear plant in the North as an enticement for Pyongyang before denuclearization or if there was an order to do so, this can be a problem even at an idea level," said Shin Beom-chul, director of the Foreign Affairs and National Security Center of the Research Institute for Economy and Society.

It was also unclear why the ministry workers deleted the North Korea project files if they merely contained ideas. According to the prosecution, 530 files, including the North Korea files, were deleted from 11 p.m. on Sunday, Dec. 1, 2019 through 1:20 a.m. the next day.

The opposition People Power Party (PPP) said Monday that it suspects the Blue House was behind the ministry's secret plan to build a nuclear plant in the North and subsequent attempt to conceal it.

"Until now, the administration and the ruling party did everything possible to obstruct the BAI's audit and the prosecution's probe concerning the early shutdown of the Wolsong-1 reactor," Rep. Lee Jong-bae, chief policymaker of the PPP, said Monday. "It's safe to assume that a project such as building a nuclear plant in the North cannot be planned without the Blue House's order. We are seeing more and more circumstantial evidence that the ministry acted to follow the Blue House's orders.

"The government and the ruling party have been so edgy about the probes, and now the pieces of the puzzle are being put together," Lee said.