Car flips over on highway, killing 7 and injuring 5

Car flips over on highway, killing 7 and injuring 5 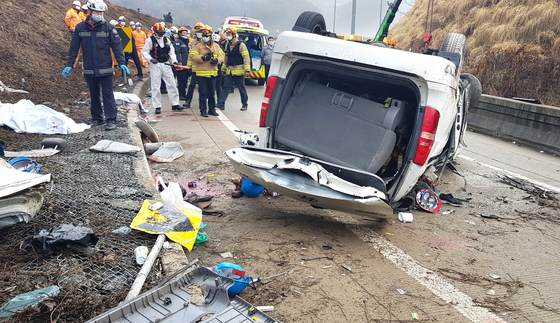 A van overturns Monday morning on an exit ramp off the Dangjin-Yeongdeok Highway in Sejong. Seven of the 12 on board were killed. The passengers were mostly Chinese laborers employed by a ferroconcrete company. [NEWS1]


A speeding van with 12 construction workers overturned on an exit ramp off the Dangjin-Yeongdeok Highway between Daejeon and Sejong Monday morning, killing seven and injuring five.

Of the seven killed, six were Chinese nationals and one was Korean. The deceased were brought to Daejeon Seongshim Hospital. The 44-year-old driver, identified only by the surname Kim, suffered injuries that were not life-threatening; however, two of the other four that were injured are said to be in critical condition after being transported to hospitals around Daejeon.

The 12 passengers departed for a job in Namwon in North Jeolla before dawn on Monday. They were returning to their employee accommodation in Sejong after the project was canceled due to rain. Of the 12, 10 were Chinese nationals, while the other two were Koreans.

According to police and the fire department, the Starex van overturned as it lost its center of gravity after colliding with a toll signpost on the curved exit ramp. CCTV footage from the South Sejong Interchange shows the van speeding to overtake a Mercedes-Benz sedan and suddenly changing lanes and barreling down the exit ramp before hitting the signpost.

The dashboard camera from the van was destroyed, but police have retrieved the Benz sedan’s camera for video analysis to determine the precise cause of the accident.

Although the speed limit on the exit ramp is 40 kilometers (25 miles) per hour, traffic records show that the van had been speeding in rainy conditions on the Suncheon-Wanju Highway between Osu and South Sejong Interchanges at approximately 120 kilometers per hour.

Eleven of the 12 passengers were not wearing a seat belt at the time of the accident, which police cited as a factor in the high number of casualties. Police also ruled out black ice as a possible cause for the tragedy, which took place in warm temperatures above 0 degrees Celsius (32 degrees Fahrenheit).

Road and safety officials enlisted 70 people and 10 cars to repair damage to the site. Traffic on the south Sejong exit ramp was restored an hour and 30 minutes after the accident. Sejong City sent out an emergency alert to citizens to avoid nearby roads.