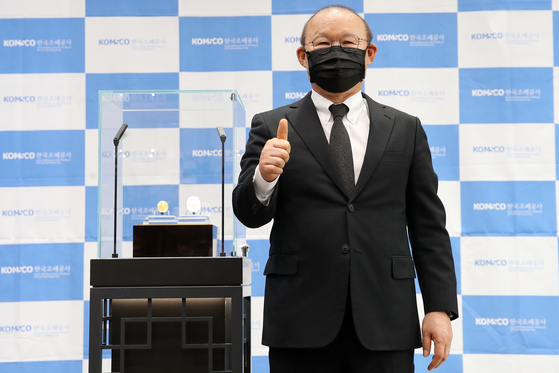 Park Hang-seo, the Korean head coach of the Vietnamese men's national football team, poses for a photo during a publicity event at the headquarters of Korea Minting, Security Printing & ID Card Operating in western Seoul on Monday. [YONHAP]

The coin has an image of Park and a Vietnamese fan cheering on one side, while the other shows the phrase "Do not bow when you have done your best," which Park said after Vietnam came second at the U-23 Asian Championship in 2018. The phrase is written in both Korean and Vietnamese.

Gold and silver coins are available, as well as a cheaper third option.

Park became the coach of the Vietnamese men's national football team in 2017 and led the team to win the 2018 AFF Suzuki Cup and the 2019 Southeast Asian Games. Park was the first foreigner to receive a second-class Labor Medal in Vietnam.

This is the first time that a commemorative coin has been made for a football coach in Korea. The first coin for an athlete was released in 2017 for the figure skater Kim Yuna.

“I hesitated a lot wondering whether I am eligible to receive such an honor. I heard I am the second [to receive a coin] in athletics after Kim. Kim is a world-class sports star, but I just had a minor achievement in Vietnam,” Park said at the ceremony.

“This coin has many meanings as it contains not only myself but Vietnam as well. Hopefully the coin will act as a bridge between South Korea and Vietnam.”

Profits from sales of the coin will be used for the development of Vietnamese youth football.

Preorders started in Korea on Monday and will begin in Vietnam next month. Coins will be available from May.