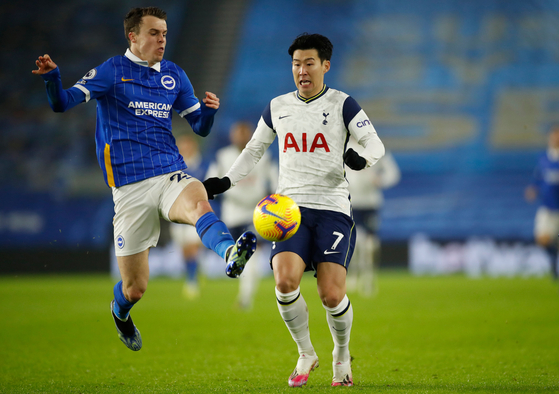 
With Harry Kane out with an injury, Son Heung-min remained silent as Tottenham Hotspur lost to Brighton & Hove Albion on Sunday night.


Spurs lost 1-0 to Brighton on Sunday evening at American Express Community Stadium, the only goal coming from Brighton's Leandro Trossard in the 17th minute. Spurs failed to offer a response throughout the remaining 73 minutes, constantly failing to convert opportunities.

Son had a few opportunities in the second half of the game, but wasn't able to get the ball past Brighton goalkeeper Robert Sánchez. Lacking the chemistry that Kane and Son have become famous for, the Spurs lineup were unable to show the flashes of brilliance that have helped the team stand out this year.

Gareth Bale took Kane's spot alongside Son with Steven Bergwijn in front, but the three weren't able to work together enough to seriously threaten Brighton.

Sunday's result is a bad one for Spurs. Not only are they the No. 6 team losing to the No. 17 team, but Spurs also ended up being the squad that broke Brighton's 14-game, at-home losing streak in Premier League games, the longest at-home losing streak in the league in more than a decade. It was also only the second time that Brighton have beaten Spurs in the Premier League.

Spurs lost their previous game to Liverpool as well, a less embarrassing result against the No. 3 team in the league.

Spurs will be back in action in the Premier League against Chelsea on Thursday, or at 5 a.m. on Friday morning in Korea.