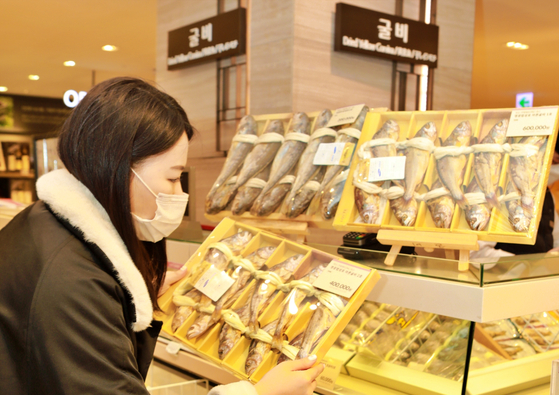 
Lee Moon-sook, 52, recently bought a 190,000 won ($170) hanwoo, or Korean beef, gift package for her parents and parents-in-law. Instead of visiting them during the Lunar New Year holidays, Lee decided to buy relatively expensive gifts and send them to her family.

"As the government's extended social distancing guidelines restrict any gatherings of five or more amid the coronavirus pandemic, I sent my parents and my husband's parents gifts instead of visiting them this year," Lee said. "Not visiting them is good for me, as well as good for them, as they are elderly."

During the Lunar New Year holidays, Koreans traditionally exchange gifts with their friends and family. Things are a little different this year, and more Koreans are looking forward to sending costly premium gifts to their families as they may not be able to visit them.

Department stores and retailers are enjoying sales jumps for their Lunar New Year gift packages as a result.

According to Lotte Department Store, it achieved record pre-Lunar New Year holidays sales. Between Jan. 18 and Jan. 30, its sales of dried yellow corvina — one of the most popular gifts during the season — rose some 115 percent compared to same period a year earlier. Sales of fresh fish soared by 103 percent, meat by 76 percent and fruits and vegetables by 94 percent, during the same period.

Sales of daily necessities rose by 44 percent on year, while sales of liquor and hangwa, or Korean biscuits and sweets, increased by 42 percent and 37 percent, respectively.

“This year’s sales of Lunar New Year gift packages are so high that we can't even compare to those of any past years,” said a spokesperson for Lotte Department Store.

Hyundai Department Store said its sales of Lunar New Year gift packages between Jan. 25 to Jan. 30 rose by 110 percent compared to the previous year. Fresh food, such as meat, dried yellow corvina and fruits were popular — their sales increased by some 176 percent.

Premium gift sets which are priced over 200,000 won were particularly popular. Various hanwoo packages — priced between 290,000 won to 1 million won — ranked in the top 10 in terms of sales.

Emart and SSG.com, the online shopping platform of Shinsegae Group, also recorded record sales this year. Between Dec. 24 and Jan. 28, Emart’s sales of Lunar New Year gifts increased by 53 percent year-on-year, while sales of these items at SSG.com rose by 97 percent.

The easing of the Kim Young-ran law was another driving force. The Improper Solicitation and Graft Act, dubbed the Kim Young-ran law, prohibits public officials, teachers and journalists, as well as their spouses, from accepting gifts worth over a certain set limit from someone "related to work."

According to Emart, sets of ginseng and deodeok root, a mountain herb, which are priced between 100,000 won to 200,000 won, rose by 679 percent year-on-year. Sales of fish and meat in this range rose by 92 percent and 26 percent, respectively.

To cover the anticipated demand, Lotte Department Store increased the available volume of meat packages by 30 percent. It also came up with small-volume packages that target single-person households or households with two family members.

“As many people may opt to skip visiting their families this year, we’ve been offering gift packages that can target single-person households and people who wish to purchase premium products,” said Chun Il-ho, head of the food sector at Lotte Department Store.