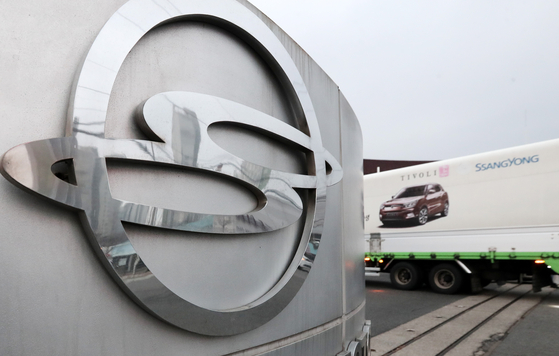 
SsangYong Motor’s main creditor Korea Development Bank (KDB) said Tuesday it currently has no plan to inject additional funds into the beleaguered automaker unless a detailed and viable rehabilitation plan is laid out by a potential investor and the automaker.


The state-run bank also said that Mahindra & Mahindra, the Indian parent company of SsangYong that holds a 74.6 percent stake, is responsible for the Korean automaker’s insolvency.

“In order for SsangYong Motor’s pre-packaged insolvency to proceed, negotiations made among stakeholders are essential, but SsangYong Motors is still in the process of coming up with a business plan or rehabilitation plan related to that pre-packaged insolvency,” said Choi Dae-hyun, vice president of the state-run bank, at an online briefing Tuesday.

“Potential investors came to Korea in mid-January and left on Jan. 31 without making a final decision on the pre-packaged insolvency as SsangYong Motor delayed the submission of required documents.”

Pre-packaged insolvency allows the debtor to come up with a rehabilitation plan before going into court receivership as long as there is consent from at least half of its creditors. The system has been designed to shorten the time and cost incurred from the bankruptcy process for a financially troubled company that has secured a way to resolve its financial troubles.

SsangYong Motor has been trying to iron out a pre-packaged insolvency plan with HAAH Automotive Holdings, a California-based car retailer, after an acquisition deal reportedly fell apart between HAAH and Mahindra.


The pre-packaged insolvency plan is reported to include Mahindra’s plan to undergo capital reduction lowering its stake in SsangYong, followed by HAAH’s investment of $250 million to make the American company the biggest shareholder of the Korean automaker.

HAAH asked KDB to offer a similar amount of financial support to SsangYong as a condition of the deal.

“It is true that the potential investor requested an equivalent amount of investment from the creditor,” Choi said.

SsangYong Motor has reported a net loss for four consecutive years since 2017.

“When a company’s accumulated loss amounts to more than 1 trillion won over the past 10 years, it needs a viable business plan, not just an injection of fresh funds.”

KDB said that if SsangYong fails to secure fresh capital resulting in the failure of its pre-packaged insolvency plan, the Korean automaker will have to go through court receivership.

SsangYong Motor filed for court receivership on Jan. 21 along with what's known as an autonomous restructuring support program, which delays the process of court receivership to earn the troubled company time to negotiate with its creditors and find new investors.

The court had delayed its decision on receivership until Feb. 28.

SsangYong Motor on Tuesday said it will suspend operations of its Pyeongtaek factory for three days from Feb. 3 to 5 as its suppliers have refused to deliver parts.