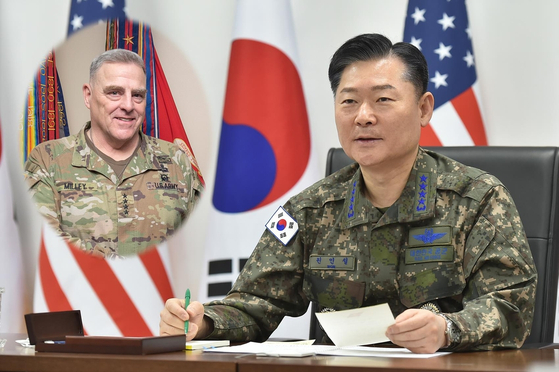 Gen. Won In-choul, chairman of Korea’s JCS, in a phone call with his U.S. counterpart, Gen. Mark Milley, gave his congratulations on the inauguration of U.S. President Joe Biden and the confirmation of new Defense Secretary Lloyd Austin last month.

Won and Milley vowed to strengthen their communication and the two countries’ combined defense posture, according to Seoul’s JCS in a statement, and agreed to speed efforts for Korea to regain Opcon from the United States in accordance with a plan signed in 2015.

“The two sides highly appreciated efforts last year to prepare for the transition of wartime Opcon despite the impact of Covid-19 and agreed to continue to accelerate efforts this year to make tangible progress toward the wartime Opcon transition,” said Korea's JCS.

Won added that he looks forward to the “the 70-year-old Korea-U.S. alliance progressing into an even more complementary and future-oriented alliance under new leadership” in the United States, according to the JCS.

The Korean government has envisioned the transfer of Opcon — which would put allied forces under the command of a South Korean general in wartime — to take place by the end of President Moon Jae-in’s five-year presidency in May 2022. However, delays in the assessment process due to Covid-19 threaten that timeline.

Col. Dave Butler, a JCS spokesman, added, “The U.S. and Republic of Korea alliance remains a linchpin of stability and security in the region.”

South Korean Defense Minister Suh Wook in a policy briefing to President Moon last month said that the Defense Ministry will actively seek policy consultations early in the Biden government to enable the circumstances for the Opcon transition.

However, it may not be possible to complete a mandatory three-step military assessment process in time to realize the transfer of Opcon by mid-2022.

In 2018, Korea and the United States agreed to kick off a three-step assessment of the Korean military needed to gauge Seoul’s readiness to take Opcon. The first stage, concerning initial operational capability (IOC), was completed in 2019, and the second phase — assessment of full operational capability (FOC) — was scheduled to be conducted last year. The Covid-19 pandemic forced the allies to scale down their combined military exercises, forcing the FOC assessment to be postponed.

The Pentagon has also stressed that the transfer of Opcon will be conditions-based, rather than rushed to meet a timeline.

Disagreements on the Opcon schedule flared in a major bilateral security meeting last October. The two sides struggled to negotiate a clear timeline for the transfer during the bilateral Security Consultative Meeting (SCM) in Washington, and speculation of friction was fueled when the Pentagon abruptly canceled a joint press conference scheduled for Korean Defense Minister Suh and then U.S. Secretary of Defense Mark Esper.

U.S. Defense Secretary Austin said in a Senate confirmation hearing last month that he would review the status of the Opcon transfer.