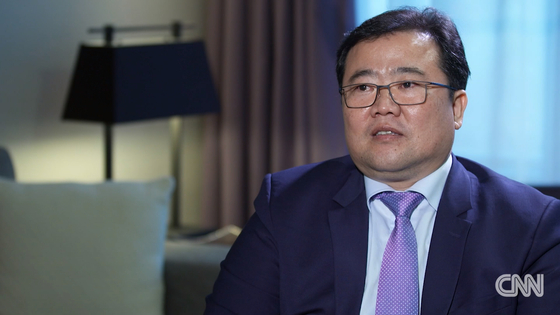 
North Korea will not give up its nuclear weapons but international sanctions may force it to negotiate, said Pyongyang’s former envoy to Kuwait, who defected to Seoul secretly 16 months ago.

Ryu Hyun-woo, once the North’s charge d’affaires in Kuwait, told CNN Monday he expected Pyongyang to engage in talks with the Joe Biden administration on nuclear arms reductions, but that it wouldn’t completely abandon its nuclear program.

“The last U.S. administration put negotiations into a stalemate with its demand for denuclearization even before it started negotiations with this totalitarian state,” Ryu said.

The “unprecedentedly strong” sanctions on the North must continue to pressure the regime into continuing talks, he added, saying sanctions were the main impetus behind North Korean leader Kim Jong-un’s diplomatic outreach two years ago.

Monday’s interview was the first time Ryu spoke to the media since he arrived in South Korea with his family in September 2019, after serving as the North’s acting ambassador to Kuwait.

His was the latest in a series of high-profile defections by North Korean diplomats to South Korea, coming just months after Pyongyang’s acting ambassador to Italy arrived in the South in July 2019.

Regarding his decision to defect, Ryu said he wanted to give his teenage daughter a better life in a free country. After planning the escape for a month in Kuwait, he took his wife and daughter to seek asylum at the South Korean Embassy, he said.

Ryu also opened up about his activities as a North Korean diplomat in the Middle East, explaining how he oversaw a network of around 10,000 North Korean laborers generating foreign currency for the regime.

Those laborers were forced to leave the Gulf region by a 2017 United Nations resolution that banned member states from employing North Korean workers, he added.

Ryu was also posted to Syria, one of North Korea’s closest allies, from 2010 to 2013, where he said he witnessed the sale of North Korean-made weapons to the Bashar al-Assad regime before the country devolved into civil war.

It was in Syria that Ryu said he was able to study the Obama administration’s nuclear negotiations with Iran, which he said could serve as a useful precedent for Biden’s dealings with Pyongyang.

Under the 2015 nuclear deal that eventually emerged, Tehran agreed to curb its nuclear weapons program in exchange for partial sanctions relief. President Donald Trump unilaterally withdrew from the agreement in 2018, a move that experts at the time said would undermine negotiations with North Korea.

Ryu said it was important for the Biden government to place emphasis on human rights, something the previous administration “greatly neglected.”

“Human rights is a matter of morality, and a very serious and sensitive one for the North Korean regime," Ryu said.

As for his personal sentiments on leaving the North, Ryu said he regretted leaving behind his elderly mother, three siblings and his wife’s parents. Family members of defectors are often punished in a “feudalistic manner” by the regime, he added.

Ryu is the son-in-law of Jon Il-chun, a formerly powerful figure in North Korea who ran Room 39, the bureau that oversees the Kim family’s foreign currency slush funds.