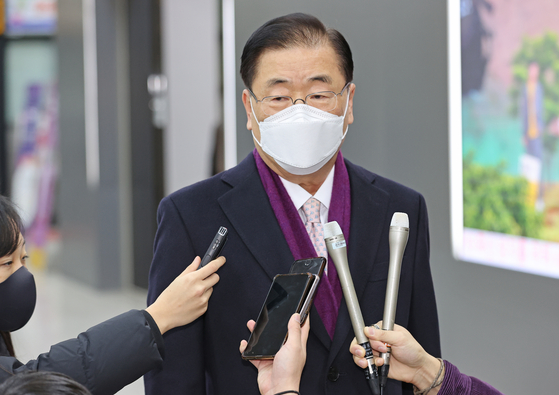 
Foreign Minister-nominee Chung Eui-yong said Tuesday that President Moon Jae-in offered a blueprint of energy assistance to North Korean leader Kim Jong-un during their first summit in 2018, but not a nuclear power plant.

Chung, who was Moon's national security adviser at the time of the summit, told reporters Tuesday that the administration has never discussed with North Korea a plan to build a nuclear plant there.

"Currently, no country can possibly offer to build a nuclear plant in the North," Chung said. "The South Korean government never considered the possibility even internally."

As the main opposition party continues to demand full disclosure of what was on a portable memory device Moon gave Kim at their first summit in 2018 — to see if there was an offer to build him a nuclear plant — Chung said the USB contained a rough sketch of inter-Korean energy cooperation.

"It was a simple overview of renewable energy cooperation, repair work for outdated thermal and hydro power plants in the North and expansion of the energy grid in Northeast Asia including Mongolia," Chung said. "Nuclear power generation was not a part of it."

He said another USB with the same contents was given to the United States. "Washington understood the intention, and truthfully, the United States was very enthusiastic about it," Chung said.

On April 27, 2018, Moon and Kim held their first summit at the truce village of Panmunjom. Moon gave Kim a USB memory device, which contained his vision for economic cooperation between the two Koreas.

The opposition People Power Party (PPP) is demanding to know if Moon’s vision included a plan to build a nuclear power plant in the North. That idea was included in documents deleted by the Ministry of Trade, Industry and Energy before a government audit in December 2019, which were later recovered.

The PPP believes the ministry deleted the documents to cover up Moon’s promise of a nuclear plant to the North. The conservative opposition party is demanding that the administration disclose the full contents of the USB from the summit and threatened an independent counsel probe and a parliamentary investigation.

Moon made a rare, direct riposte to the PPP’s allegations on Monday, and the ministry released the six-page document that explored the possibility of building a nuclear plant in the North, along with other options. The ministry said they were merely ideas, not an official project, and the document was created after the summit.

At the National Assembly on Tuesday, Chairman Lee Nak-yon of the ruling Democratic Party (DP) spent the final one minute and 45 seconds of a 40-minute speech directly attacking the PPP. Opposition lawmakers loudly jeered him, while the DP lawmakers applauded. 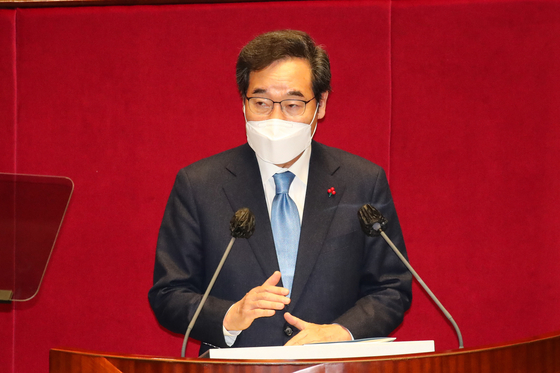 Chairman Lee Nak-yon of the ruling Democratic Party (DP) gives a speech at the National Assembly on Tuesday. [NEWS1]


“As far as I remember, a plan to build a nuclear power plant in North Korea was never mentioned during the summit,” Lee said in a speech at the National Assembly on Tuesday. “No such plan was included in the USB that Moon gave Kim.”

“I was the prime minister when the series of inter-Korean summits took place in 2018,” Lee said. “The National Intelligence Service reported to me about inter-Korean relations and key information concerning the North.”

Lee said the president specifically asked him as prime minister to make sure that the ministries would not act hastily in follow-up measures agreed at the inter-Korean summit. “The president wanted steady progress in inter-Korean relations,” he said.

Lee said it was unacceptable for the PPP to attack the president on what he called a wrong assumption. “The leaders of the largest opposition party have crossed a line they should not have,” Lee said. “The opposition party made a perfectly wrong judgment and launched an attack on the president that cannot be overlooked.”

Lee said the PPP must be held accountable for accusing Moon of having committed "an act benefiting the enemy." The PPP’s acting Chairman Kim Chong-in made the remarks last week. 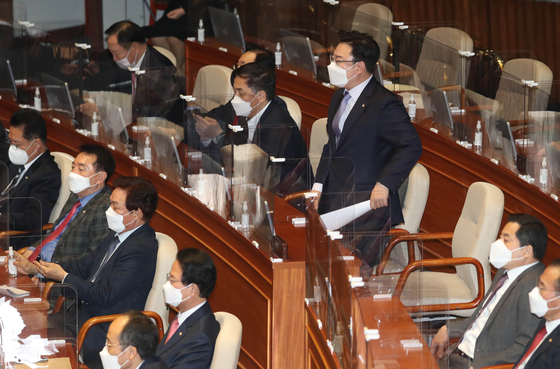 Rep. Kim Sung-won, deputy floor leader of the main opposition people Power Party, stands up from his seat to lodge a complaint to ruling DP Chairman Lee Nak-yon as Lee attacks the opposition during his speech at the National Assembly. [YONHAP]


Presidential Senior Secretary for Political Affairs Choi Jae-sung also said in an interview with MBC Radio on Tuesday that the Blue House should not disclose the contents of the USB. “If we lay bare everything about the summit just because the opposition is making groundless claims, what will happen to this country?” Choi asked.


But, he warned darkly, the Blue House could consider disclosing the contents, “if the PPP is willing to put its fate at risk.” It was unclear what Choi was demanding from the PPP in return for the disclosure.

Rep. Yoon Young-chan of the DP, who was senior presidential secretary for public affairs during the summit, said Tuesday that the USB contents can be disclosed if necessary because there is nothing to hide. “This is, of course, a decision to be made by the Blue House,” Yoon said.

Yoon said he had participated in the summit preparation when he was the presidential aide, and the USB contained a blueprint for economic cooperation between the two Koreas that Moon has envisioned since 2015. “It discussed power plant issues, but not a nuclear power plant. It was about thermal, hydro and renewable energy plants.”

Rep. Hong Ik-pyo, chief policymaker of the DP, also said Tuesday that he had participated in creating the blueprint when Moon was chairman of the party in 2015. “I don’t think it will stir any problem if the contents are made public,” Hong said.

Other DP politicians, however, said it will be a diplomatic disaster to disclose the USB contents.

“You cannot just disclose diplomatic matters discussed between leaders of two countries,” said Rep. Song Young-gil, chairman of the Foreign and Unification Committee of the National Assembly. “No country in the world ever does that. If we disclose this just because the opposition party is pressing us, inter-Korean relations will never be restored, no matter who becomes the president in the future.

“It is not just about inter-Korean relations. We can be isolated diplomatically in the world,” he said.

The PPP continued to press the administration to come clean about what Moon offered to Kim at the summit.

“After seeing the six-page document of the ministry, experts said the mystery is actually growing deeper,” Rep. Bae June-young, spokesman of the PPP, said Tuesday.

“The document started with a disclaimer that it was an internal review of possible alternatives if a nuclear power plant is constructed in North Korea, not an official position of the government,” Bae said. “Experts said they rarely have seen such a disclaimer in a government report.”

Bae said it is hard to believe that a junior-level public servant drafted such a report without higher officials’ orders, especially since it seemed to contradict the Moon administration’s policy of phasing out nuclear power in South Korea for safety reasons.

He said the ministry document was created between the first summit on April 27, 2018 and the second on May 26, 2018, and Kim happened to stress the importance of nuclear energy during that period.

“The people are curious if it was just a coincidence, so the government just has to answer transparently this question,” Bae said.