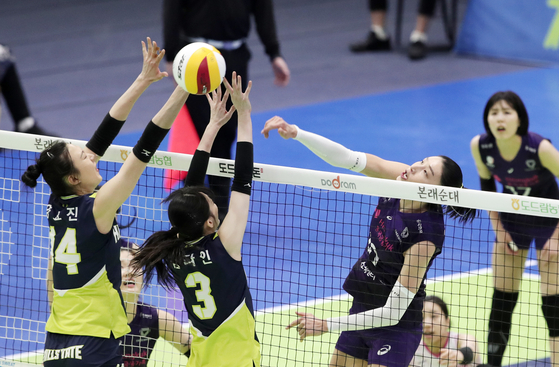 For years, the V-League has been able to rely on the rivalry between Lee Jae-yeong and Lee Da-yeong, the twin sisters that also happen to be two of Korean volleyball's very best players. But things changed this season. After years of friendly competition and pulling faces at each other across the net, Lee Da-yeong signed with the Life Insurance Pink Spiders, joining her sister on the Incheon squad.

With the twin rivalry neutralized, V-League fans had to look elsewhere for a little bit of drama this season. Then Kim Yeon-koung returned to Korea.

Kim, generally considered the best female volleyball player Korea has ever produced, decided in 2020 to return to the domestic league after more than a decade playing overseas. Kim rejoined her former club, the Pink Spiders, joining the twins to give the Incheon side an unbeatable edge this season.

And with Kim's return comes another rivalry for V-League fans to focus on. Kim may not have a twin sister, but she does have an old roommate and best friend, Yang Hyo-jin of Suwon Hyundai Engineering & Construction Hillstate.

Kim and Yang have been friends for years, although they have never played for the same club in the V-League. Kim started her career with the Pink Spiders before leaving to play in Japan in 2009, and then moving through Turkey and China over the next decade. When she returned to Korea last year, it was straight back to the Pink Spiders.

Yang, on the other hand, has spent her entire career with Hillstate, debuting in 2007. Yang joined the Korean national team in 2008, joining Kim who had been a member since 2005.

Over the years, the two became close friends as they developed into two of the most influential players in Korean volleyball history. While Kim's fame grew around the world, Yang stayed in Korea, honing her craft. She is now the top individual scorer in V-League history, with 5,836 points as of Feb. 1. Last year, Yang captained Hillstate as they won the V-League and was named MVP for the season.

And the Kim-Yang rivalry has lived up to the hype. Even though the Pink Spiders are dominating the V-League in first place and the Hillstate are struggling in last, their head-to-head record for the season only has the Incheon club narrowly ahead with three wins to two.

Kim and Yang were evenly matched throughout, with Yang repeatedly able to block Kim when it mattered most, and Kim able to come back with a well-placed spike that edged around Yang. Their friendship off the court also kept fans interested.

With V-League victory practically already locked up for the Pink Spiders, the rivalry between the two teams is quickly becoming the more exciting sideshow as the season winds down. The Pink Spiders and Hillstate will face off one more time this season, on March 9. If the Hillstate win, their record will be tied at 3-3 for the season.

When Kim returned to Korea last year, she only signed a one-year contract with the Pink Spiders, saying that she wanted to be in Korea ahead of the Tokyo Olympics. With Kim's future in the V-League uncertain, the Kim-Yang rivalry could end up being short-lived. If Kim decided to return to a bigger league overseas next year, Yang will once again be the undisputed queen of the V-League.