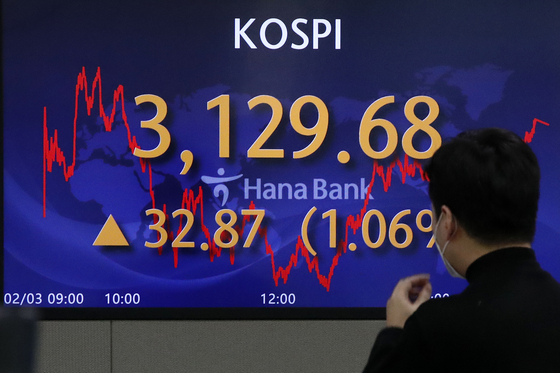 A screen shows the final figure for the Kospi in a dealing room in Hana Bank in Jung District, central Seoul, on Wednesday. [NEWS 1]


Korean stocks extended their winning streak to a third consecutive session Wednesday, as foreigners continued to buy local stocks on expectations of a speedy economic recovery in Asia and globally. The won rose against the dollar.

The Kospi got off to a strong start after adding over 4 percent in total in the past two sessions, backed by optimism over a fast economic recovery, particularly in exports.

"[The Kospi] seems to have gained on the fact that the gross domestic product (GDP) in the eurozone has not fallen much, in addition to positive news related to the Covid-19 vaccine supplies and hopes of U.S. stimulus plans," Shinhan Financial Investment analyst Shin Yoo-joon said.

"The overall hike in Asian stock prices seems to have influenced the local stocks in the big picture as well," he said.

Auto shares performed well, following a local report that Kia Corp., a smaller affiliate of Hyundai Motor, may have seen some progress in its talks with Apple Inc. for potential partnership in developing electric cars. However, Hyundai Motor said nothing has been determined yet.

The local currency closed at 1,114.9 won against the dollar, down 2.8 won from the previous session's close.

Bond prices, which move inversely to yields, closed mixed. The return on three-year bonds closed flat as yesterday at 0.98 percent, and the return on the 10-year bond rose 2.3 basis points to close at 1.09 percent.