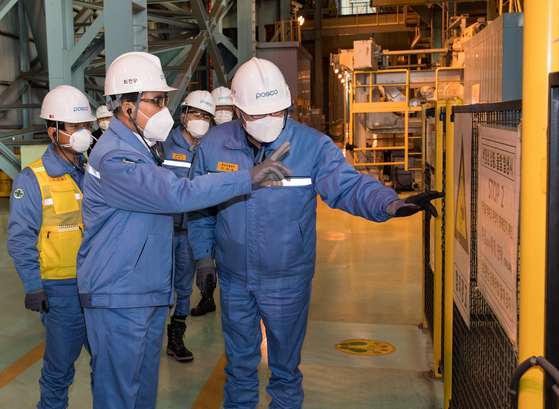 
Steelmaker Posco is prioritizing safety over productivity this year, responding to years of criticism over accidents that have caused fatalities and injuries at its production sites.

“From now on, failing to meet production goals while taking necessary safety measures should not be punished, but rewarded,” said Posco CEO Choi Jeong-woo during a top executive meeting.


“Workers assigned to dangerous tasks or expecting difficulty in carrying out specific requests due to physical or psychological reasons always have the right to reject — we need to make sure this is fully respected at this company.”


Posco said it would be taking on a major direction shift this year to “safety first” from productivity first — a notable initiative coming from a steelmaker where the best way to raise profit is to increase production volume.

The company has been grappling with a tainted image due to explosions and accidents over the past few years. Last year alone, more than five people died at Posco’s production sites.

Korean labor laws stipulate that employees can evacuate the workplace in potentially dangerous circumstances. In real life, it is not largely practiced at Korea’s industrial sites where there remains an authoritative work culture and top-down decision making — a hangover from the old days when profit growth was the only priority.

That meant workers are often forced to work in unstable work environments as factories run on temporary safety measures rather than undergo more fundamental maintenance work and safety inspections.

To organize an environment where workers can better stand up for their own safety, Posco introduced an online petition system where people can report managers for dangerous work assignments via a mobile app. The accusations will be immediately dealt with, the company said.

Safety equipment will be upgraded as well: Posco decided to increase purchases of wireless surveillance cameras that can be attached to the wall and body cameras to keep a constant watch for potential danger. The steelmaker is also planning to adopt safety balls at its work sites, which can be thrown in closed spaces to check for safety issues like gas leaks.

The costs would be covered from the three-year, 1 trillion won ($896 million) investment plan reserved for improving safety measures, announced in December last year.

“Investments related to workplace safety will be executed earlier than others,” Choi said.