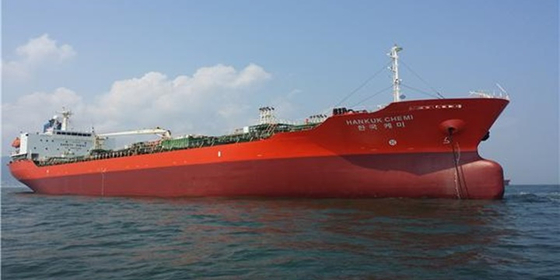 An image shows South Korean oil tanker MT Hankuk Chemi that was seized by Iranian authorities on Jan. 4, in the Strait of Hormuz. Iran agreed Tuesday to release all crew members except the captain. [YONHAP]


Iran agreed to release all crew members of a South Korean-flagged oil tanker seized in the Strait of Hormuz last month with the exception of the captain, the two countries’ foreign ministries confirmed Tuesday.

The MT Hankuk Chemi, which was en route to the United Arab Emirates from Saudi Arabia, was seized by Iran's Islamic Revolutionary Guard Corps in the Persian Gulf on Jan. 4. There were 20 crew members aboard the ship: Five South Koreans including the captain and 11 Burmese, two Indonesian and two Vietnamese sailors.

The two governments "started an important first step in restoring trust between Korea and Iran," said the Korean Foreign Ministry, and "agreed to restore traditionally friendly relations that help each other out in difficult times by resolving the frozen asset issue."

Iranian authorities blamed chemical and environmental pollution issues for the ship's seizure, accusations rejected by the Busan-based operator of the vessel, DM Shipping.

Seoul's Foreign Ministry protested the seizure and dispatched a team of diplomats led by Koh Kyung-sok, director-general of the ministry's Africa and Middle Eastern Affairs Bureau, last month to negotiate the release of the ship and its crew.

In January, Choi made a separate visit to Tehran, scheduled ahead of the ship's seizure, to discuss how to handle Iran's assets locked in Korean banks due to U.S. sanctions. He also requested the release of the vessel, held in Iran's Bandar Abbas Port, and its crew. 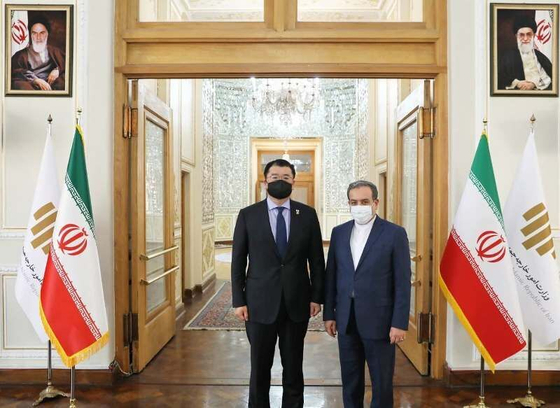 
In May 2018, the Donald Trump administration withdrew from the Joint Comprehensive Plan of Action (Jcpoa), signed in July 2015 by Iran, Britain, France, China, Russia, Germany and the United States, under which Tehran agreed to curb its nuclear weapons program in exchange for a lifting of sanctions.

Iran has pressured Seoul to unlock assets worth some $7 billion held in the Industrial Bank of Korea and Woori Bank that have been frozen since September 2019, when U.S. sanctions waivers for Korea's imports of Iranian oil expired.

In a phone call Tuesday with Araghchi, Choi explained that the Korean government will push forward with issues it can resolve independently, and that in negotiations that require consultation with Washington, it will proceed transparently.

Iranian Foreign Ministry spokesman Saeed Khatibzadeh confirmed Tuesday that all crew members except the captain will be released on Seoul's request as a humanitarian gesture.

He said that Iran will continue to pursue the legal case against MT Hankuk Chemi, however.

A Seoul Foreign Ministry official said that Iran says it is holding the Korean captain for the management of the vessel, and that “he will be released once the legal procedure ends.”

He added, “However, it appears that Iran thought that the captain alone would be enough to manage the seized vessel,” adding that the ship’s operator said essential personnel are needed to operate the tanker, and that there are “internal discussions to designate the personnel currently.”

DM Shipping pointed out Wednesday that it may be difficult for all the crew members to return immediately because at least 13 sailors are needed to operate the vessel.

The Seoul official said the release comes after 14 rounds of talks with Iran following the return of the Korean diplomats from Tehran, adding that Vice Minister Choi’s visit and other diplomatic consultations were “helpful in conveying the sincerity of Korea to the Iranian leadership.”

The Korean government has been making diplomatic efforts to work around the frozen assets, including requesting a sanctions waiver from the U.S. Treasury to use the frozen Iranian funds to purchase Covid-19 vaccines for Iran through the Covax Facility mechanism.

However, much may depend on how the United States and Iran resolve their diplomatic tensions. Biden has said that Washington wants to rejoin the Iran nuclear deal should Tehran return to full compliance to the standards of the Jcpoa.

In an interview with NBC Sunday, U.S. Secretary of State Antony Blinken warned that Tehran was possibly “a matter of weeks” away from being able to produce enough fissile material for a nuclear weapon.

In turn, Iranian Foreign Minister Javad Zarif told CNN Monday that Washington has a "limited window of opportunity" to return to the 2015 nuclear deal and called for a reversal of U.S. sanctions imposed during the Trump administration.

He said that one possible step would be for the European Union to “choreograph the actions” needed by the United States and Iran to return to the Jcpoa.

He also addressed Blinken’s remarks and said, “If we wanted to build a nuclear weapon we could have done it some time ago.”