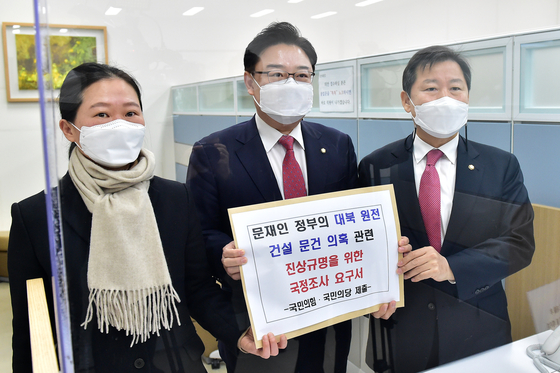 Lawmakers from the opposition People Power Party and People's Party submit Wednesday a joint motion to the National Assembly demanding a parliamentary investigation into the allegation that the Moon Jae-in administration planned a nuclear plant for North Korea. The motion was sponsored by 105 lawmakers from the two parties. [YONHAP]

The main opposition party on Wednesday demanded a better explanation from the administration about a plan to build a nuclear plant for North Korea, rejecting the energy ministry's claim that a junior official came up with it on his own.

"Members of this administration are distorting the undeniable truth to mislead the public about the Moon Jae-in administration's attempt to build a nuclear power plant to help North Korea," Rep. Joo Ho-young, floor leader of the People Power Party (PPP), said in a speech at the National Assembly. "Please stop distorting the truth." 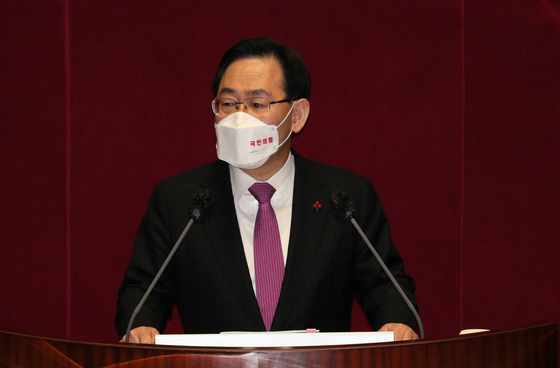 Rep. Joo Ho-young, floor leader of the People Power Party, gives a speech at the National Assembly on Wednesday. [YONHAP]

Controversy continues over events following Moon's first summit with North Korean leader Kim Jong-un on April 27, 2018. A six-page report by the Ministry of Trade, Industry and Energy, created in May 2018 explored three ways to offer energy aid to the North: Building a plant in the North; building one inside the demilitarized zone; or completing the Shin Hanul-3 and 4 reactors in the South and sending electricity to the North.

The report was released by the ministry on Monday.

Although the ministry claimed the report described mere ideas, not an official project, Joo rejected that claim Wednesday. At the time the report was written, Moon was pushing a policy to stop nuclear power generation in Korea, and ministry workers would not have defied the presidential policy to explore building a nuclear plant for the North, Joo said. The ministry was eager to implement Moon's nuclear phaseout policy, he said, quoting a recent audit that some workers risked breaking the law to shut down a reactor earlier than scheduled.

"North Korea's Kim said in his 2019 New Year's address that he will push forward a national project to resolve the electricity shortage [...] and improve nuclear power generation capability," Joo said. "Many of us are wondering what accounted for Kim's confidence that he would develop nuclear power generation capability when the country does not have a single commercial reactor."

Joo also pressed the administration to disclose the contents of a USB memory device Moon gave Kim at the April 27, 2018 summit to prove the government's claim that it did not contain any plan to offer a nuclear plant. Foreign Minister-nominee Chung Eui-yong, who was national security advisor to Moon at the time of the summit, has said the USB had no mention of a nuclear plant and its contents were were shared with the United States.

Joo said many members of the ruling party and administration already know the contents of the USB, so the administration should disclose them to the public if it has nothing to hide.

The PPP and the smaller People's Party also submitted a motion to the National Assembly on Wednesday to start a parliamentary investigation into the allegation that the administration had a plan to build a nuclear plant in the North. The two parties' 105 lawmakers sponsored the motion.

Experts, including a former president of the Korea Hydro and Nuclear Power Co. (KHNP), also challenged the government's repeated claim that the controversial ministry report was just ideas by one junior bureaucrat that were never considered seriously — especially since the report was one of 530 documents deleted by the ministry before a probe of a separate issue began in December 2019.

"The government still failed to answer why the report was deleted if it only contained ideas and why some public servants had considered a plan to build a nuclear plant in the North when the president was pushing a nuclear phaseout policy [for South Korea]," said Lee Joong-jae, who headed the state-run KHNP from 2004 to 2007 during the Roh Moo-hyun presidency.

Lee is a nuclear energy expert who also worked at the Korean Peninsula Energy Development Organization (KEDO) in 1998. It was an international project to build two light water reactors in return for the North's nuclear dismantlement, a plan that was scrapped in 2006 due to Pyongyang's clandestine nuclear development.

"As I examined the report, I could tell it was authored by a public servant with in-depth knowledge about nuclear plant construction," Lee told the JoongAng Ilbo on Tuesday.

Other experts said it may be possible that the Ministry of Trade, Industry and Energy tried to use inter-Korean economic cooperation as a justification to resolve other problems triggered by Moon's nuclear phaseout policy.

In October 2017, the government halted the construction of Shin Hanul 3 and 4 reactors as part of its policy of weaning Korea off nuclear energy. In the report, the possibility of using those two reactors was discussed to offer energy to the North — meaning the construction would be revived. 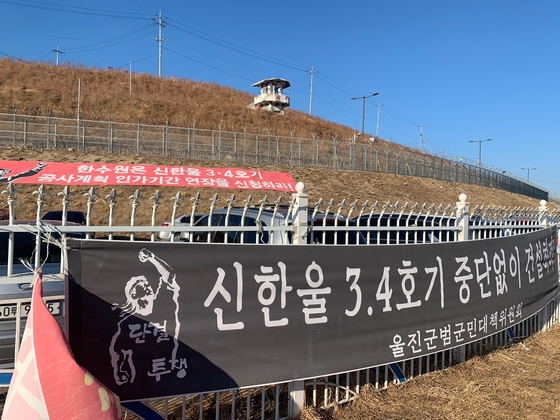 The halted construction site of Shin Hanul 3 and 4 reactors at the Shin Hanul Nuclear Plant in Uljin, North Gyeongsang, on Tuesday. [KIM JUNG-SUK]

In the plan to build a nuclear plant in the North, one idea was to use parts already produced for the Shin Hanul 3 and 4 reactors to save costs.

The report said salvaging parts from the halted Shin Hanul project would save about 500 billion won ($449 million).

Experts speculate that workers at the energy ministry may have desired to resolve problems associated with halting the Shin Hanul construction through an inter-Korean cooperation project.

If the construction was scrapped for good, the government would have to compensate the company.

"If the Shin Hanul 3 and 4 reactors were used for the inter-Korean project, costs could have been paid through the inter-Korean economic cooperation fund," said Professor Jerng Dong-wook of the Chung-Ang University's School of Energy Systems Engineering. "The government could also silence the complaints of the nuclear plant industry."

Another expert, Professor Joo Han-gyu of Seoul National University's Department of Nuclear Engineering, said the ministry may have considered the inter-Korean economic project as a novel way to resolve problems caused by halting of the Shin Hanul 3 and 4 construction. "But the problems should have been resolved in a normal way, not this absurd way," he said.

Joo also said the report was too elaborately argued to be mere brainstorming.

"The report actually contains feasible plans," he said. "Except for the second plan of building a nuclear plant inside the demilitarized zone, the first plan of building a nuclear plant [at the KEDO site in the North] and the third option of completing Shin Hanul 3 and 4 and sending electricity are feasible in the long term. If you look closely, it is hard to say that a junior-level public servant would have created this on his own."

The former KHNP president Lee also said the report is substantial. "It seems that a ministry official put serious efforts to produce it," he said.