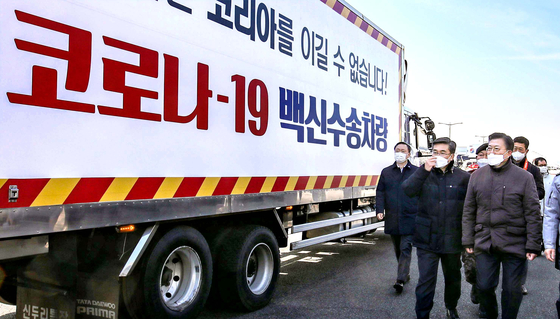 President Moon Jae-in observes a mock drill simulating the transportation of Covid-19 vaccines from a cargo terminal station at the Incheon International Airport Wednesday with the cooperation of military and police. [JOINT PRESS CORPS]

President Moon Jae-in warned that there is “no margin for error” as he watched a Covid-19 vaccine drill Wednesday.

Moon visited a Korean Air cargo terminal at Incheon International Airport Wednesday morning to watch a drill that kicked off Monday and simulates the transportation, storage and distribution of vaccines that start arriving later this month.

The drill ran through the arrival of the foreign-made vaccines at Incheon airport, their transportation to a logistics center in Pyeongtaek, Gyeonggi and arrival at the state-run National Medical Center in Jung District, central Seoul.

The National Medical Center will have cold chain storage capacities to administer mRNA vaccines such as the ones developed by Pfizer and Moderna.

Moon called for the drill to be conducted “thoroughly” and to “prepare so that there are no worries by the people during the whole process.”

The KDCA is in charge of the overall vaccination process, while the Defense Ministry will oversee the transport and storage management system. Other agencies will oversee various stages of distribution such as rapid customs clearance for the vaccines and police escorts to deliver them safely to vaccination centers.

Korea plans to start Covid-19 vaccinations in late February of medical workers, the elderly and the vulnerable population and move into inoculation of the general public in the second half of the year. It has sourced enough vaccines so far for 56 million people, more than enough to cover its 52 million population.

A batch of Pfizer’s Covid-19 vaccine to inoculate 60,000 people is expected to arrive through the Covax Facility later this month, along with AstraZeneca vaccines for up to 2.19 million people in the first half of this year. The government has deals to buy vaccines from Johnson & Johnson's Janssen and Moderna and is close to signing a contract with another U.S. drug manufacturer, Novavax, for vaccines for another 20 million people.

The fast-track import system allows for the import of unauthorized medicines needed urgently to deal with the outbreak of infectious diseases and public health crises.

Covid-19 cases bounced back to the 400s after remaining in the 300s in the past several days amid calls by small businesses to ease some social distancing measures ahead of the Lunar New Year holiday that runs from Feb. 11 to 14. 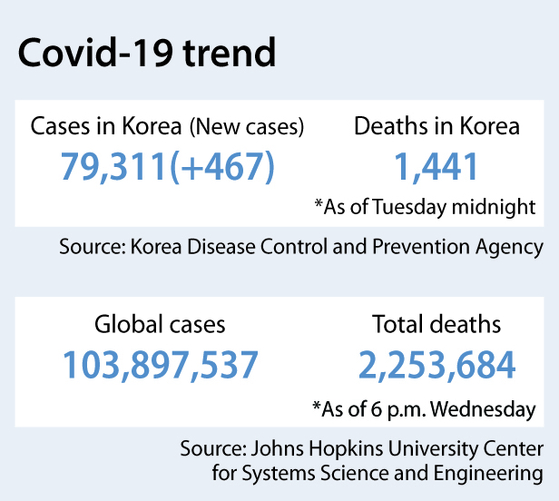 Korea reported 467 new Covid-19 patients, of which 433 were local infections, as of Tuesday midnight, according to the KDCA Wednesday, bringing total cases to 79,311.

Of 34 imported cases, 15 were from Europe and five from the United States.

Four people were identified to have the variant from Britain and one for the South African variant, both thought to be more contagious, according to the Central Disease Control Headquarters.

The patients with the British variant are from South Gyeongsang and South Jeolla and were infected by contact with a relative of an overseas visitor undergoing self-isolation at home. This marked the first domestic transmissions of that Covid-19 variant.

The patient with the South African variant was infected through a family member who returned from overseas in North Gyeongsang.

This brings the total reported variant cases to 39.

Nine inmates at the Nambu Correctional Institution in southern Seoul working at the jail kitchen were confirmed to be Covid-19 positive Tuesday. The Justice Ministry said that there were no additional cases after a first round of testing of all inmates and staff and it plans for a second round of testing later this week. The nine inmates are isolated in single-person cells.

A major Covid-19 outbreak at the Dongbu Detention Center in eastern Seoul, which led to over 1,200 infections, revealed in December lax Covid-19 social distancing practices in prisons.

Chung met with leaders of the United Christian Churches of Korea and the National Council of Churches in Korea at the government complex in central Seoul and noted that while most churches were abiding by government regulations, there are some cases of noncompliance leading to infections in church communities.

After a first case was confirmed on Jan. 24, a total of 385 Covid-19 infections were linked to International Mission (IM), a Korea-based Christian missionary group that runs international schools and educational facilities unauthorized by the government in cities including Gwangju and Daejeon.