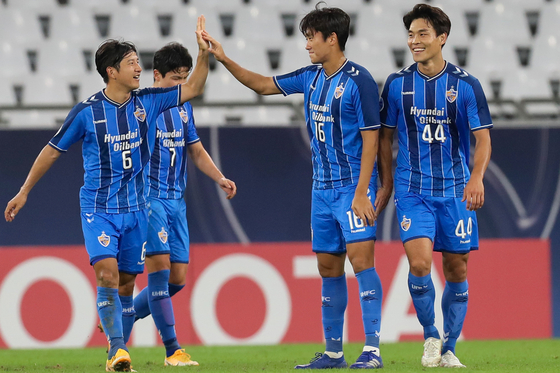 Ulsan Hyundai players celebrate their second goal during the AFC Champions League Round of 16 match against Melbourne Victory on Dec. 6, 2020 at the Education City Stadium in Qatar. [AFP/YONHAP]

The opening match of the knockout tournament typically pitches the winner of the OFC Champions League against the domestic league winner, with the victor moving on to the second round. As OFC winner Auckland FC have withdrawn from the tournament, the first round was canceled and the Qatari side automatically progress to the second round, where Ulsan enter the tournament.

Ulsan face tough competition from Tigres, the official club of the Autonomous University of Nuevo León, as the majority of the team are also members of the Mexican international squad, which ranks ninth in the world. Captain Guido Pizarro and goalkeeper Nahuel Guzmán are both Argentinian internationals, often appearing for the world's No. 7 side.

Ulsan and Tigres will face off in the opening game of the Club World Cup, at 5 p.m. local time on Thursday at Ahmed bin Ali Stadium in Qatar, or 11 p.m. in Korea. The game will be broadcast live on SPOTV.