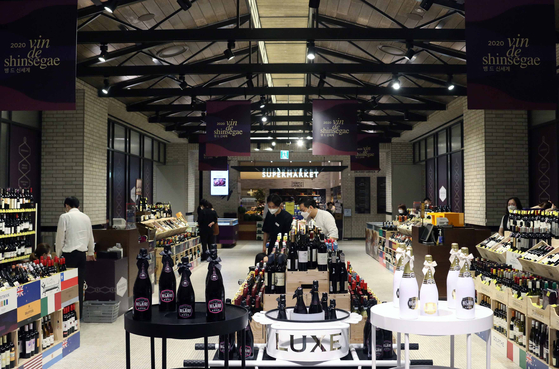 Among all imported alcohol, wine was the alcoholic beverage most favored by Koreans in 2020, pushing beer into second place.

For the first time ever, more wine was imported into Korea than beer last year and some retailers like Lotte Mart saw a whopping 83.4 percent increase in its wine sales, compared to the statistics from the year previous.

Many experts point out that the release of affordable, quality wines, which averaged less than 10,000 won ($8.94) a bottle, had many reaching out for something new, even those who usually opt for beer. Also, with the pandemic keeping people at home, many wine experts tried their hands at opening their own retail outlets or creating YouTube accounts to appeal to those trying new bottles at home.

According to Customs Korea, the total sales amount in 2020 reached 282 million dollars, with the total imported amount reaching some 450 million tons. Compared to wine imports valued at 113 billion dollars in 2011, the total amount has more than doubled in the past 10 years. The sudden hike last year can be mostly attributed to the pandemic which kept many people at home.

With more people looking for affordable wines that they can easily pick up from local retailers to drink casually with their friends, smaller convenience stores, which can be found on practically every street corner, are becoming the epicenter of wine purchases. According to 7-Eleven, about 31.3 percent of its wine sales were from bottles priced under 10,000 won last year. In response, the retailer has expanded its line of affordable wines to keep consumers coming back for more.

CU has even unveiled its own brand called “mmm!” in partnership with a Spanish vineyard featuring red wine priced at 6,900 won.

Steven Park, a 21-year-old graduate school student from Incheon, is a frequent consumer of wine sold at local convenience stores. He tends to go for wines priced under 20,000 won but sometimes goes for bargain buys under 10,000 won. And its not just convenience stores where he shops, he often hits up large retailers too.

“Most retailers and convenience stores have a simple explanation on what the wine is like,” said Park, who usually drinks the beverage once a week, mostly at his home or at his friends’ homes due to the pandemic.

“I used to drink soju but it’s bitter [...] Wine is more easily approachable and also delicious.”

Convenience store CU offers its own brand wine ″mmm!″ for those looking for a low budget option. [CU]

Budget friendly wines have been a magnet for novice wine drinkers entering the world of wine for the first time. After trying different varieties, newbies begin to remember certain regions from where wine they've enjoyed has come from, or the type of grape they enjoy, and seek out those wines for further enjoyment. YouTube and Instagram are also excellent outlets to learn more about wines and the jargon related to them.

“The total amount a novice wine drinker spends [on wines] may not be that much initially, but as they buy wine more frequently they eventually open up their wallets more to try bottles that are a bit out of their normal price range,” said an official at Lotte Mart.

“Many consumers are drawn to wine when they see certain bottles that are even cheaper than beer.”

Lotte Mart, which saw a whopping 83.4 percent increase in its sales of wine last year compared to the year earlier, announced that one of its major areas of focus this year will be wine and predicts growth of related sales by as much as 35.1 percent especially from consumers in their 20s and 30s. To help consumers get information about products as they browse, the retailer plans to add more staff with wine knowledge and service backgrounds as well as introduce a wider range of wines priced around 50,000 won.

While not as much as large supermarkets, department stores have also seen a jump in sales. Shinsegae Department Store saw an increase of about 41.1 percent in wine sales last year compared to the year before, while Hyundai Department Store, which used to see an average annual sales increase of 12 percent, say its sales jump by 26 percent. Its sales of cheese also increased by 23 percent, while that of wine glasses jumped 18 percent. 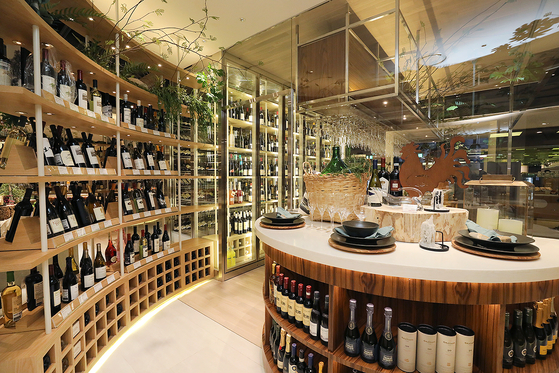 Hyundai Department Store's main branch in Apgujeong, southern Seoul, has a wine shop that also offers a space to sip on your purchases. [HYUNDAI DEPARTMENT STORE]

“Thanks to big name companies that have made many low-cost wines available in the local market, there is a growing number of wine drinkers who slowly move to more premium wine regions like Champagne, Burgundy and Bordeaux in France, as well as the U.S.’s Napa Valley for some cult wine,” he said. “These people generally gather information on wine through online wine communities or YouTube, and keep their wine photos on mobile application Vivino.”

Online wine communities have also been active during the pandemic, offering a space for connoisseurs and novices alike to make recommendations and ask for suggestions. Some wine importers or local retail shops make use of these communities of wine lovers and offer special prices exclusive to members.

“Because they can’t go outside and do things they used to and show off their social activities, many have moved toward wine as an item to show their lifestyle on social media outlets,” said Lee, adding that more people are posting wine photos online.

Some wine experts that used to be employed in the food and beverage industry, which has been hit particularly hard by Covid-19, having made the move to open their own shops.

“It wouldn’t be an exaggeration to say that two or three new shops pop open every morning,” said Han Woo-sung, manager of wine importer Vitis. There are many who add retail spaces or take out options to their bars. “As they can't stock too many wines, they usually carry what appeals to their own personal tastes."

The rising sales of wine at retail shops, however, has caused concerns for those who run wine bars and restaurants. Sommelier and owner of Lieu Dit, a wine bar and shop in Changwon, started a YouTube channel to continue communicating with his customers who have are now choosing to stay home to enjoy their wine.

Some wine bars are offering additional discounts on selected wine if customers take the bottles to-go, or allow people to enjoy their own bottles for a corkage fee as long as they also order a bottle off the menu.

“Wine bars and restaurants will have to consider this year how they are going to operate, as it is expected that the sales of wine at these places will fall,” said sommelier Shin Dong-hyuk of wine bar Honnetes Gens in Cheongdam-dong, southern Seoul.

“If the wine purchases from shops stay high and becomes a part of wine consumer habits, people will continue to choose shops to get to know more about the wines they want to try even after the pandemic, so the restaurant industry needs to be prepared for that day, although no one yet knows how to prepare.”

Chill with some wine