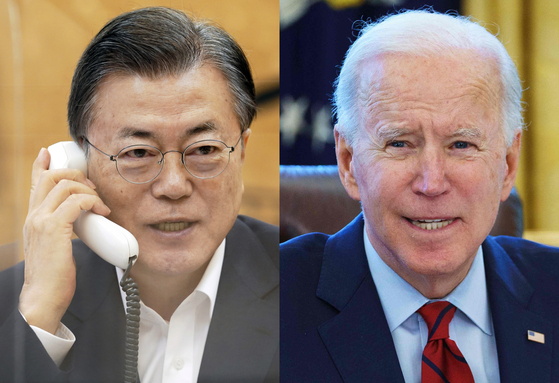 "President Biden and I pledged to further upgrade the [Korea-U.S.] alliance, an alliance that is anchored in shared values," Moon wrote in a statement posted on social media networks including Facebook.

"We will always stand together as we work for peace on the Korean Peninsula and tackle global challenges," Moon said.

"The two leaders reaffirmed that the two countries have a vital alliance for the region's peace and prosperity," Blue House spokesman Kang Min-seok said. "They agreed to continue to develop this alliance anchored in shared values into a comprehensive strategic partnership that will contribute to democracy, human rights and multilateralism, going beyond the Korean Peninsula and Indo-Pacific region."

"The two leaders agreed to the need to work together on a comprehensive North Korea strategy as soon as possible," Kang said.

Moon and Biden also agreed that improving Korea-Japan relations and cooperation among Korea, Japan and the United States are crucial for the peace and prosperity of the region, Kang said.

The White House also issued a statement about the phone talk. It said Biden talked to Moon about the bilateral alliance, "which is the linchpin for peace and prosperity in Northeast Asia."

The White House statement, compared to that of the Blue House, only had a brief mention on North Korea. ""The two leaders agreed to closely coordinate on [North Korea]," it said.

Conspicuously missing from both statements was any mention of China. Since he took office, Biden has been working to build an alliance of democracies around the world to counter China.

When Biden spoke on the phone with Japanese Prime Minister Yoshihide Suga on Jan. 27, the White House statement said, "They discussed regional security issues, including China and North Korea."

In that statement, the discussion on North Korea was also described more elaborately. "They together affirmed the necessity of complete denuclearization of the Korean Peninsula, and the early resolution of the abductions [by North Korea of Japanese citizens] issue," it said.

Following his conversation with Moon, Biden had a phone call with Prime Minister Scott Morrison of Australia, and called the U.S.-Australia alliance an "anchor of stability in the Indo-Pacific and the world."

"They discussed how we can work together to address global and regional challenges, including dealing with China," the White House said.

"It seems that he used different expressions to reflect the different expectations for each alliance," said Shin Beom-chul, director of the Foreign Affairs and National Security Center of the Research Institute for Economy and Society.

"Korea is not an active participant in the Indo-Pacific strategy, so it would be wrong to call the Korea-U.S. alliance the linchpin for the Indo-Pacific," he said. "Biden, therefore, talked about the alliance's role in the Northeast Asian region, where actual cooperation is taking place."