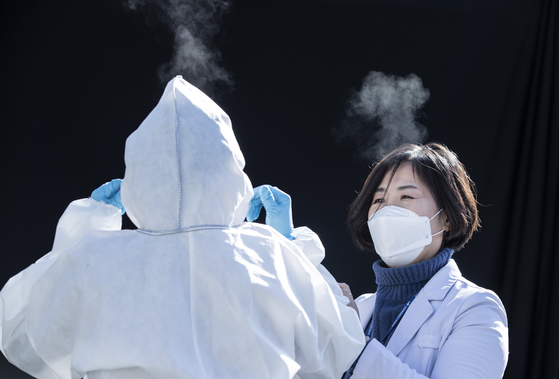 
Kim Se-jae, a 55-year-old nurse in charge of infection control at Hyundai Hospital in Namyangju, Gyeonggi, has been working to treat Covid-19 patients practically nonstop ever since the outbreak in 2020.

“I want to have a nice meal with my family and sleep as much as I want,” said Kim.

The year 2020 is an unforgettable year for Kim, a veteran nurse who has been working for more than 20 years. Covid-19 has been at the forefront all throughout the year.

Kim handles almost everything, from controlling the flow of people coming in to keeping tabs on patients' fevers, managing the ward's outpatients and patients with suspicious symptoms, receiving new patients and transferring inpatients to other hospitals.

“When [coronavirus] patient No. 1 was confirmed a year ago, I thought the infectious disease would subside quickly because the Korean medical system was well established,” said Kim. “But when I saw the first spike in Daegu between February and March last year, I knew it would soon spread all over the country.”

When she witnessed the surge of Covid-19 patients in Daegu, Kim was determined to help fight against the pandemic.

Her premonition was not wrong. In late February last year, the government required hospitals to obtain a ventilator for Covid-19. At that time, a patient who entered from Mongolia for cirrhosis treatment was confirmed positive for Covid-19, and the family needed a place to quarantine.

There was no infection control facility at the time, so Kim emptied the entire ward that the patient was in, with a total of 32 beds, and quarantined the family in the ward.

As the staff were unfamiliar with Covid-19, Kim alone was in charge of educating all of the hospital's medical workers.

When the fever of a member of the family in quarantine rose to 38 degrees Celsius (100.4 degrees Fahrenheit), she was appalled at the idea of another case.

The fever was discovered to be caused by an underlying disease, and all of the family returned to Mongolia safely after the two-week quarantine.

She tolerated complaints from patients, guardians and those who were in quarantine. “When I heard abusive remarks like, ‘Who are you, and why are you bothering me?’ while stopping a patient who was going to smoke, I felt despondent,” Kim said.

“When a man who came from another province wanted to meet his wife, who was in quarantine, it was really difficult for me to explain that he was not allowed to visit his wife because she is a confirmed Covid-19 patient.”

They even received severely ill patients whom other hospitals were reluctant to receive because of concerns of more contagion. “More than 80 confirmed patients were hospitalized and treated, but not a single medical worker in the hospital was infected,” Kim said.

“Even a large hospital was shut down due to an employee infection. I was proud to be the head of our infection control.”

Kim was a top nurse in the hospital, but she was always a "sorry mom" at home. She was bereaved of her husband two years ago and has a daughter and son, born within a year of each other. Her daughter got a job last year, but she couldn’t have dinner with her once.

“My daughter became a nurse. She has a lot of things she wants to hear from me in her first year, but I just sleep at home and go to work right after waking up in the morning,” said Kim.

“I want to go on a trip to Wando, South Jeolla, where I lived before with my daughter,” she said. “I’m not sure when Covid-19 will end, but I hope we can stay healthy together until the end.”