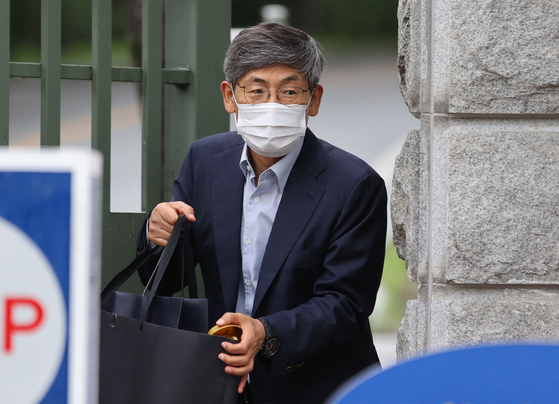 Former Samsung Electronics' chairman of the board Lee Sang-hoon is released from prison August last year after a high court cleared him of union-busting charges. The Supreme Court upheld the conviction on Thursday. [YONHAP]


The Supreme Court upheld convictions for over two dozen Samsung executives and employees on Thursday for sabotaging labor activities, dealing a punishing blow to the conglomerate for its decades-long aversion to unionization.

Samsung Electronics Vice President Kang Kyung-hoon and around 30 other company employees, suppliers and labor management professionals were convicted for breaching labor union-related laws through attempts to neutralize a labor union of the conglomerate’s customer service branch.

Lee Sang-hoon, chairman of Samsung Electronics’ board, was cleared of all charges. The court acknowledged he too was involved in the company’s attempts to stifle labor activities but acquitted him on the basis that the evidence against him was collected unlawfully.

The convictions arrive amid a leadership vacuum at Korea’s leading chaebol following the incarceration of Samsung heir and Vice Chairman Lee Jae-yong, who was sentenced to two years and six months in prison by a high court last month.

The condemned executives once served on the group’s Future Strategy Office, a now-defunct organ in the conglomerate that wielded immense decision-making powers over Samsung Group’s corporate governance.

In 2013, leftist Justice Party lawmaker Rep. Sim Sang-jung exposed a trove of company documents that revealed the office had engineered an extensive strategy to counteract collective organization by employees.

The plans included directives to shut down contractor companies with strong labor unions and impose various forms of demerits on employees in a union.

The allegations were further substantiated in February 2018 through a prosecutorial probe into a corruption scandal surrounding former President Lee Myung-bak. Prosecutors found incriminating evidence on labor sabotage plans from a USB drive obtained from a Samsung employee’s car, then raided company offices to gain further documents.

The legality of these seizures, however, was challenged by Lee Sang-hoon’s legal team, which argued neither the car nor the office where the documents were found were included on a search warrant previously issued. The Seoul High Court in August 2020 accepted the challenge and cleared him of the charges.

The executive’s initial conviction nonetheless refreshed legal and media scrutiny on the company’s decades-old no-union policy, prompting a rare apology from Samsung Electronics in December 2019 promising to prevent recurrences of such union-busting acts.

Months later in May last year, Lee Jae-yong announced the group would end its half-century-old ban on labor unions. Samsung Display subsequently became the first branch of the group to formally acknowledge a trade union formed by its workers in July.