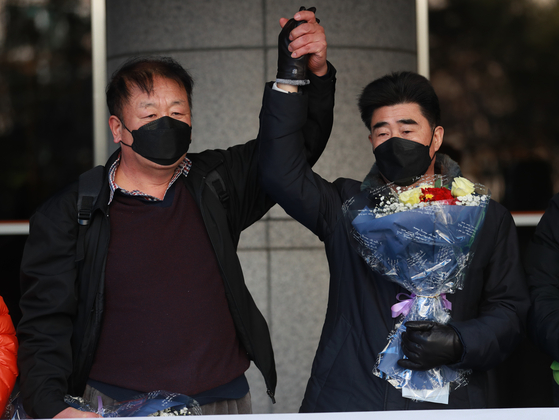 Choi In-cheol, right, and Jang Dong-ik hold hands in the air together after the Busan High Court on Thursday acquitted them in a retrial of the 31-year-old Nakdong River murder case. The pair served 21 years in prison but argued their confessions were extracted through torture by the police. [YONHAP]


The Busan High Court on Thursday exonerated two men who served 21 years in prison after giving forced confessions in the Nakdong River murder case, more than three decades after the crime.

Following a retrial request from Choi In-cheol, 60, and Jang Dong-ik, 63, the court revisited the case and ruled the pair innocent based on the fact that their testimonies were extracted using torture.

Presiding Judge Kwak Byeong-soo said in the ruling, “In addition to conducting the arrests illegally without obtaining warrants, the fact that police employed torture in the course of their investigation can be concluded from the consistency of the victims’ testimonies [of being tortured]and the testimonies of those imprisoned with them at the time.”

In clearing the men of the charges of robbery and murder, Kwak added, “Confessions obtained through torture and abuse do not carry the power of evidence.”

The Nakdong River murder occurred in January 1990, when a man and a woman on a date in a vehicle were abducted by unidentified assailants. The woman was sexually assaulted and murdered, and the man was injured.

Police arrested Choi and Jang as suspects a year and 10 months after the crime. They were sentenced to life imprisonment but were released early for good behavior in 2013 after serving 21 years behind bars.

The pair had long argued since the original investigation that they were tortured into giving false confessions, but their claims went unacknowledged until April 2019, when the Past Affairs Committee of the Supreme Prosecutors' Office investigated the case and concluded that their convictions were fabricated through torture, accelerating the movement toward a retrial.

Prior to being elected, President Moon Jae-in served as a member of the pair’s legal defense. In a 2016 broadcasting program, he described the case as the one that still fills him with regret after 35 years of working as a lawyer.

Kwak issued an apology to the defendants. “Because the court did not properly consider the abuse and submitted evidence, you suffered for over 21 years in prison,” he said. “The court apologizes to you and your family for having failed in its role as the defender of your human rights.”

Sex offender cuts off tracking monitor, kills 2, turns himself in