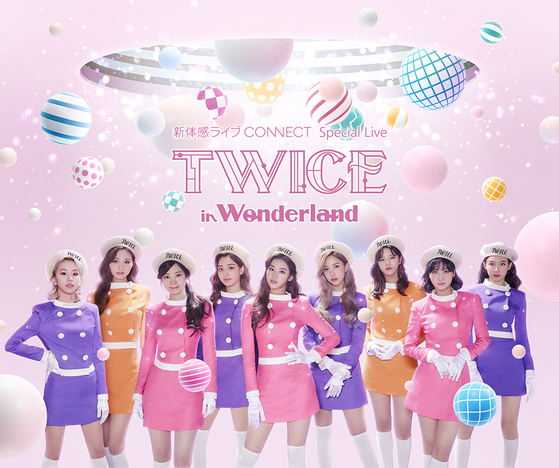 
K-pop girl group Twice will be meeting with global fans in a special online live concert in Japan set for March 6 at 7 p.m., according to JYP Entertainment on Friday.

This will be Twice’s second standalone online concert, following “Beyond Live - Twice: World in A Day” held in August 2020.

The concert titled “Twice in Wonderland” is part of a project by Japan’s largest mobile phone operator NTT Docomo which uses cutting-edge technology such as augmented reality (AR) and mixed reality (MR) to make the show vividly realistic.

Twice was the first K-pop girl group to go on five dome tours in three major Japanese cities in March 2019, which also made them the record holder for the shortest time taken by a non-Japanese artist to perform at the Tokyo Dome. Twice had debuted in Japan only 21 months prior to their first Tokyo Dome show, serving as an indicator of an artist’s success in Japan.

Twice’s most recent scheduled Tokyo Dome shows, part of their “Twice World Tour 2019 ‘Twicelights’ in Japan” tour, was postponed and eventually canceled last year by the Covid-19 outbreak despite having sold out in the first three minutes of sales.

[THINK ENGLISH] Twice meets Once during virtual trip around the globe