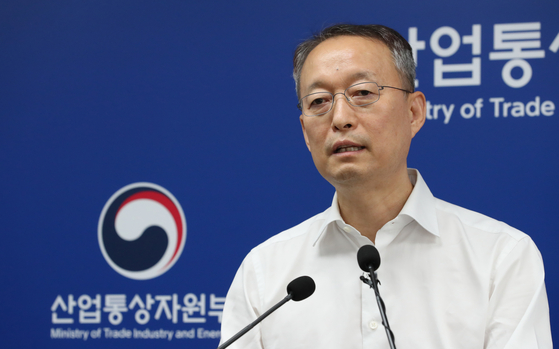 
The prosecution requested a warrant to detain a former Moon Jae-in administration energy minister on charges of abusing his power to shut down the country's second-oldest nuclear reactor.

The Daejeon District Prosecutors' Office said it requested the Daejeon District Court on Thursday to issue an arrest warrant for former Minister of Trade, Industry and Energy Paik Un-gyu on charges of abuse of power and obstructing business of the state-run Korea Hydro and Nuclear Power (KHNP).

The prosecution already questioned Paik as a suspect on Jan. 25 during its investigation on whether the government broke the law by shutting down the Wolsong-1 nuclear reactor in Gyeongju, North Gyeongsang, earlier than scheduled.

The Board of Audit and Inspection (BAI) last October found that the KHNP decided to shut down the reactor in 2018 due to a faulty assessment that deliberately underestimated the economic advantage of keeping it going.

The prosecution suspects that Paik, who served as the energy minister from July 2017 to September 2018, abused his power to force public servants to prematurely shut down the reactor. He is also suspected of having ordered ministry workers to delete 530 government files in order to obstruct the BAI's audit.

According to the BAI's audit report, a head of the Nuclear Power Policy Division of the ministry, identified only by the surname Jeong, reported to then-Minister Paik in April 2018 that the Wolsong-1 reactor should be operated until the Nuclear Safety and Security Commission's permanent suspension of its operation some two and a half years later.

Paik rebuked him and ordered another review to enable the immediate shutdown of the reactor, according to the audit.

The audit showed Jeong subsequently requested an outside accounting firm to rig its assessment to underestimate the advantage of keeping the reactor in operation. Based on the new report, the KHNP decided to shut down the reactor in June 2018.

Jeong and two other public servants were indicted last December on charges of deleting the ministry documents.

The Wolsong-1 reactor had ceased operations in 2012, at the expiration of its 30-year lifespan. Moon's predecessor, former President Park Geun-hye, however, decided in 2015 to spend 700 billion won ($635 million) to extend its lifespan through November 2022. The reactor subsequently resumed operations in August 2015.

The KHNP abruptly reversed the plan in June 2018, prompting speculation from opposition party politicians that the decision was a political one to accommodate Moon's nuclear phase-out policy.

The National Assembly asked the BAI in September 2019 to investigate the legitimacy of the decision. The BAI said the audit took an extraordinarily long time, one full year, because the ministry strongly resisted the investigation.

Prosecutors are expected to further investigate whether the orders came from higher up, such as the Blue House. Chae Hee-bong, a former presidential secretary for industrial policy, is likewise accused of having played a key role in pressuring the KHNP to decide in 2018 to shut down the Wolsong-1 nuclear reactor early, accusations he has denied.

Get to the bottom of the case