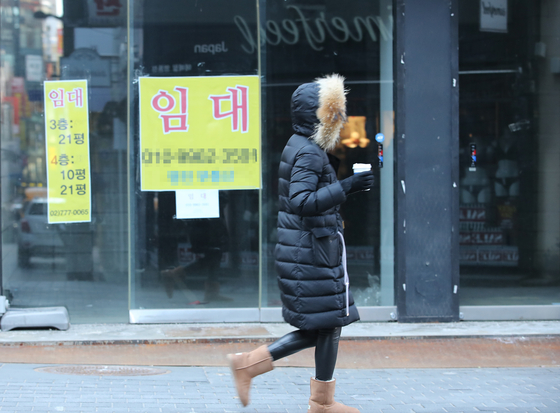 A store in Myeong-dong, central Seoul, is shown vacated on Jan. 29. Many stores in one of the most popular tourism districts were forced to close as the social distancing regulations implemented since late November continue. [YONHAP]


The spike of Covid-19 that escalated in November and continues today has left a major scar on the domestic economy, according to the latest assessment by the state-owned think tank.

The Korea Development Institute (KDI) in its report released on Sunday stated that the “third” wave of Covid-19 has worsened the domestic economy.

Retail in December fell 2 percent year-on-year, an increase from November when it fell 1.5 percent.

The service industry shrunk 2.2 percent compared to 1.4 percent in November.

The KDI noted that the situation will be the same for figures in January as the government maintained strict social distancing measures.

With the retail and service industry hit hard by Covid-19 social distancing regulations, jobs in these areas were also affected.

In December, 622,000 working in the service industry were no longer employed. That’s nearly triple the size of 287,000 in November.

The number of people who are no longer actively participating in the economy now amounts to 17.2 million, which is the largest number since data first started being compiled in 1999.

Exports last month grew 11.4 percent to $48 billion largely on the back of strong outbound shipments of key export goods in areas like biohealth, mobile telecommunication and semiconductors.

Exports have been growing for three consecutive months since November, which is the first in nearly three years.

Semiconductor production was up 18.6 percent. Semiconductors are Korea’s leading export good, accounting for nearly 20 percent of goods exported from Korea.

The average factory operating rate in the manufacturing industry was 74.5 percent, an improvement from November’s 73.9 percent.

Facility investment in December grew 5.3 percent, similar to the previous month at 5.4 percent.

The government projected the economy to increase 3.2 percent this year. Last year, the economy contracted 1 percent, marking the first time since the IMF crisis two decades ago.

KDI warns of economic risks due to Ukraine war and inflation