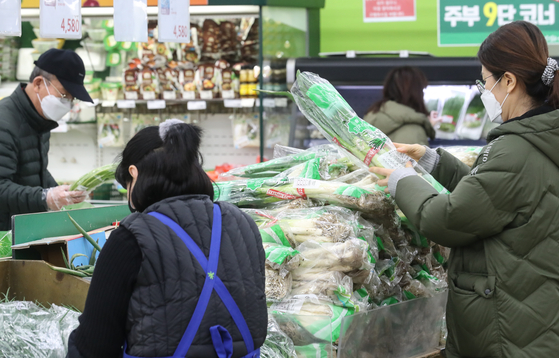 Consumers shop in the produce section at a local mart in Seoul on Friday. The price of food used in Lunar New Year celebrations have been rising rapidly, including eggs. [YONHAP]

Rising food prices show little sign of stabilizing with the Lunar New Year holiday now less than a week away, with government efforts to import additional supplies having little effect.

The government has increased imports of eggs and opened up its agricultural stockpiles in the hopes of lowering the inflated prices of food, yet such efforts have had little impact on food prices.

The rising price of eggs is largely the result of the spread of avian influenza, affecting production, as well as high demand with the upcoming holidays where eggs are used to make traditional food enjoyed while celebrating the Lunar New Year.

The prices of foods used in jesa, or the ancestral rites that are a key part of the Lunar New Year celebration for many families, have been rising especially fast.

The average price of top-quality hanwoo, or Korean beef, sirloin was 101,448 won per kilogram. The price of the beef broke 100,000 won per kilogram for the first time in June last year as demand rose with more people staying at home due to social distancing restrictions. The government’s emergency relief grant, distributed in May last year, also encouraged many households to purchase beef.

However, the price since then has stabilized, and by January this year the average price retreated to the 90,000-won level. It recently started to go above 100,000 won.

The prices of fruit saw a sharper increase, especially apples, which are a jesa staple.

“Prices of eggs have surged so much that people are dubbing it eggflation,” said Vice Minister Kim Yong-beom, who headed the meeting. “If the supply of eggs worsens, [the government] will actively look into additional imports.”

Vice Minister Kim added that the government will also double supplies of apples and pears.

“We will prepare to take action if needed, including preventing acts that distort Lunar New Year-related food products,” Kim said, warning against those that try to profit from the high demand, including by hoarding.

Some of the experts warn that while the government’s temporary supply plan could help stabilize food prices, the fundamental focus should be on resolving the avian flu.

“As many of the egg-laying chickens have been [culled], it will take time before egg supplies recover to the previous level,” said Kim Dong-hwan, Anyang University professor on trade and distribution. “Food prices will not rise continuously when the agricultural produce harvest this year improves and avian flu is solved.”

An official at Statistics Korea, who wished anonymity, said agriculture and livestock prices have largely contributed to raising inflation this year.

The official said agricultural prices including livestock will likely be lowered when domestic supplies increase.