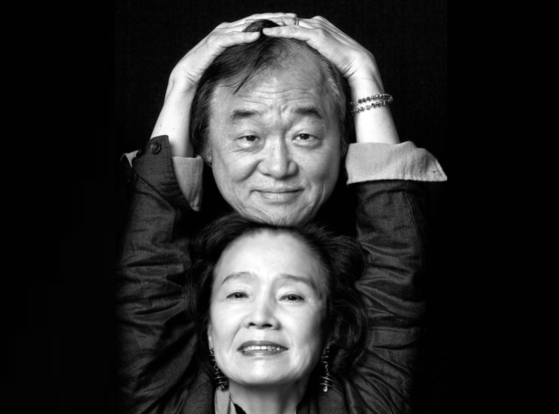 The petition stated that Yoon has been "left alone in a small house in Paris, fighting Alzheimer’s and diabetes without any support from her husband or daughter." The petition initially included the aforementioned names but they were quickly erased as using real names goes against protocols for posting a Blue House petition.

Yoon, whose real name is Sohn Mi-ja, enjoyed great popularity as a movie star in the 1960s and 70s. She married Paik in 1976 and the pair had a daughter together, who is currently a violinist playing with an orchestra in France.

The petition went on to state that Yoon has “a daughter but she is too busy to look after her own mother” and that Yoon is “living a life like a prisoner.” It has garnered 2,700 signatures as of Sunday.

Paik's agency Vincero released a statement Sunday saying that Yoon’s three siblings filed a lawsuit against Paik in relation to her custody about two years ago, which they lost three months ago. Last November, the Paris High Court ruled that Paik and the daughter were Yoon's guardians and that she was residing in safe and appropriate conditions.

Paik addressed the allegations through his agency Vincero on Sunday, calling them groundless and saying that “Yoon is being taken good care of by her family. This issue was settled by the high court in Paris.”

Vincero also added that the sentencing stated that Yoon’s siblings’ “claims that Yoon’s spouse and daughter do not show affection toward Yoon, that she’s not properly being cared for and that there are suspicions of Paik’s possible embezzlement are groundless.”

Paik revealed his wife was suffering with Alzheimer's two years ago and shocked the nation through an exclusive interview with the JoongAng Ilbo, an affiliate with the Korea JoongAng Daily. In the interview, Paik said that signs of Yoon’s Alzheimer’s had begun about 10 years earlier. He tried to cure her without it becoming public.

Paik and Yoon had been residing in Paris, but when Yoon's mother passed away in 2019 and the couple had to travel to Korea, Paik decided to reveal Yoon’s condition.

“With my frequent travel, I thought about admitting her into a nursing home in Korea but she was such a famous figure I hesitated,” he said in the interview. “Then luckily, my daughter in Paris said she’ll take care of her so we got a smaller house near her house in May 2019.” Paik added that he hired caregivers who take turns to visit the house when his daughter was busy.

Paik revealed in the interview that the “court’s ruling confirmed that Yoon’s siblings’ visits and continuous reminders that she is an actor and talking about filming put her at risk of causing mental anxiety.”

Paik’s daughter Jin-hee also told the JoongAng Ilbo two years ago that the doctor advised that Yoon live in a tranquil atmosphere and not be visited by those that can bring her stress.

“That is why we got a house with a view of trees and a lake,” she said.

Paik recently released a Schumann album and is currently touring across the country.

Time to reinvent the NEC (KOR)

Time to reinvent the NEC