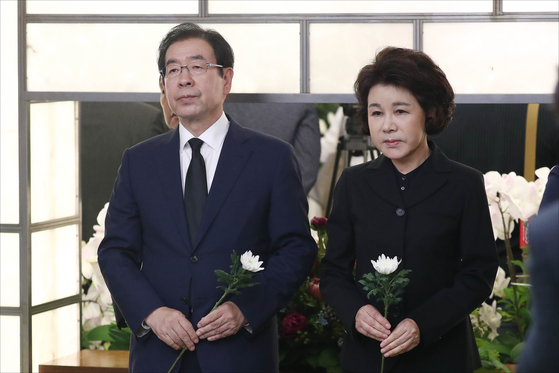 Former Seoul Mayor Park Won-soon's wife, Kang Nan-hee, allegedly wrote in a letter to Park's supporters that she does not believe her husband sexually harassed his former secretary.


Blue Dia, an association of supporters of Park and the ruling Democratic Party, posted on its Facebook account on Sunday photos of the alleged letter, calling it a "handwritten letter from Mrs. Kang Nan-hee."

"Dear friends of Park Won-soon, this is Kang Nan-hee," begins the letter dated Saturday. "I do not think [the conclusion by the National Human Rights Commission of Korea] is the final word on the case [...] The Park Won-soon that I knew for 40 years would not do such a thing."

The National Human Rights Commission of Korea announced on Jan. 25 that Park sexually harassed his former secretary for years.

Park's former secretary reported Park for sexual harassment on July 8, 2020. Park went missing the next day and was found dead on July 10 near a trail in Mount Bugak in Seoul. Police concluded he committed suicide. By law, any investigation into Park's misbehavior was closed due to the death of the suspect.

The commission has no power to press criminal charges, but it opened an investigation into the allegations after the former secretary's lawyer made a request in August 2020.

A week after the commission's announcement of its findings last month, an association of Park's supporters that calls itself the Remember Wonsoon group, released a statement accepting the commission's findings.

"At this point, the conclusion by the commission is the only and final ruling on the scandal," the group said in its statement on Feb. 1. "We accept the commission's findings with a heavy heart and convey our consolation to the victim."

It was this statement that led the writer of the letter, allegedly Kang, to speak up.

"The [Remember Wonsoon] group said in its statement that it accepts the findings by the commission and that it understands that there is no perfect human, that Park had his virtues and faults," the letter reads. "This broke our hearts. It is the belief of my family and I that the very foundation for those of us trying to continue the legacy of Park is to believe in Park and to restore his name."

Neither the association of Park's supporters, nor Kang, issued any statement confirming or denying whether the letter was written by Kang as of press time Sunday.