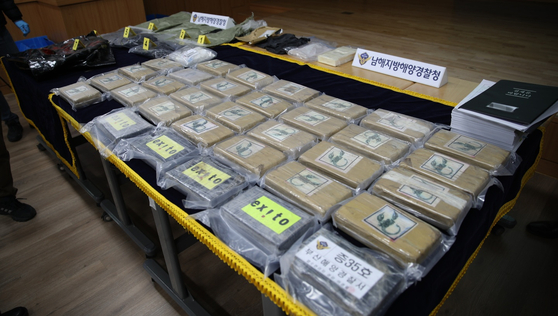 Cocaine confiscated by the marine police in Korea from a ship that arrived at a port in Busan last month from Colombia. [YONHAP]

Some 35 kilograms (77 pounds) of cocaine were confiscated from a ship at a port in Busan, marine police announced Saturday.

According to the police, the cocaine, estimated to be worth around 100 billion won ($89.5 million), was discovered on a 14-ton vessel registered to Liberia on Jan. 19. The ship had set sail from Colombia and was on its way to China when it stopped in Busan.

The marine police said they had been tipped off by the ship’s operator that there was a significant amount of cocaine in the steering room of the ship, before it arrived in Korea.

The police had a search warrant ready when it did arrive and together with Korea’s customs authorities, searched the steering room and found 35 boxes each containing one kilogram of cocaine.

Aboard the vessel were 24 crew members, including Greeks, Russians and Ukrainians, according to the police. None of the crew members were Korean.

The marine police said they collected the fingerprints of the crew members and will be conducting an investigation to find out how the drugs made it onto the ship.

Possession, sale and transport of cocaine is illegal in Korea, except for medical research and medicinal purposes.

Air Busan to resume Qingdao route, but transiting through Incheon