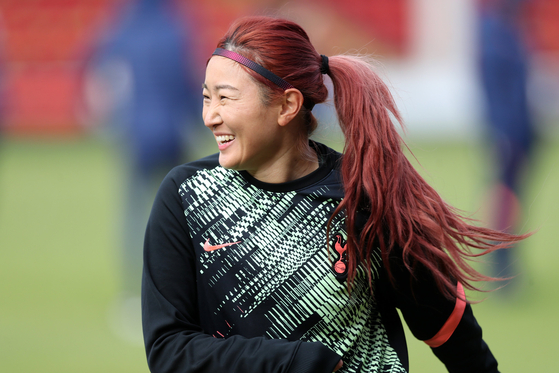 Cho So-hyun makes her first appearance in a Tottenham Hotspur shirt during a match against Aston Villa on Saturday. [SCREEN CAPTURE]

Cho, who was on the bench a week earlier when Spurs took on Chelsea, had a chance in the second half, narrowly missing the chance to tap in a cross from Kit Graham in the box. Cho's second chance flew over the bar 10 minutes into injury time.

Aston Villa walked away with a 1-0 win at Bescot Stadium in Walsall, England. Spurs remain at seventh place in the FA Women's Super League standing, with Aston Villa just two points behind at ninth.

Cho joined Tottenham on loan from West Ham United for the remainder of the 2020-21 season on Jan. 29.

“I decided to transfer at the end of last year. I was a key player in West Ham, but I wanted to challenge myself in a stronger team. I thought there would be more chances for my successors if I move forward,” said Cho in a phone call with the JoongAng Ilbo last week.

The move takes Cho slightly higher up the Women's Super League, with West Ham ranked 10th to Spurs' seventh. The 32-year-old playmaker is the second Korean to play in the Super League, after Ji So-yun of Chelsea.

It was hoped that Ji, who has seen considerable success with top-ranked Chelsea, and Cho would face off when Chelsea beat Spurs 4-0 on Jan. 31, but Cho spent the game on the bench.

“After the match, So-yun expressed regret that we weren’t able to play together. I wanted to play, but it is rare to come on right after two days of training.”

“It’s been three years since I moved to Britain and I have adapted to the language and the culture. My new teammates were welcoming and they call me Jo. I will work well with them and be ready as quickly as possible." 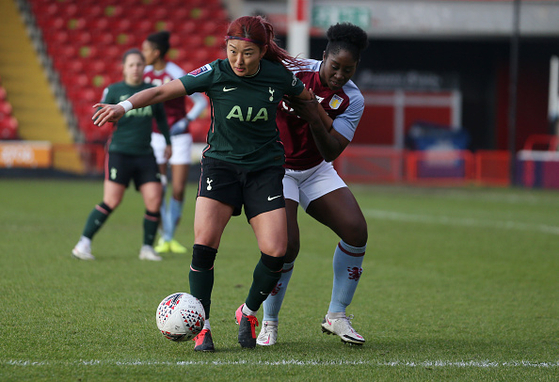 Cho So-hyun of Tottenham Hotspur dribbles the ball past an Aston Villa player as the two clubs faced off in the FA Women's Super League on Saturday. [SCREEN CAPTURE]


Cho is expected to add some experience and strength to Tottenham's midfield, based on more than a decade of experience with the Korean national team. Cho has made 126 appearances for the Taeguk Ladies and has scored 20 goals, making her the team's most-capped player ever.

Cho is also one of the most consistent members of the national team — with great physical strength, shooting skills and charisma. Cho captained the national team to their first-ever World Cup knockout round in 2015, and has continued to lead the squad ever since. On their website, Tottenham describe Cho as "one of South Korea’s most decorated women’s players."

“While I concentrated on defense in West Ham, I am a box-to-box midfielder at Tottenham," said Cho. "I am confident I can do it as my playing style is aggressive."

Cho joins Son Heung-min at Tottenham, with the Spurs star striker appearing in a video posted on the club's social media pages welcoming her.

“After seeing the video, my teammates asked whether Son and I knew each other," said Cho. "I said 'no' because I’ve never met him personally. Then they said 'since you are on the same team now, you will get to know him.'"

“When I meet him, I want to say ‘I feel confident to see you doing so well.’ I will prove that both captains from Korea’s men and women’s teams are skilled."

But before Cho gets too comfortable in north London she'll have to fly back to Korea. The Taeguk Ladies will take on China in the first leg of the Tokyo Olympics Women’s football final preliminary round on Feb. 19 on Jeju Island.

“I have two wishes for the new year," said Cho. "One is to score many goals for Tottenham, and the second is to make it into the finals at the Olympics for the first time by beating China."

Parting with the ‘special one’ (KOR)