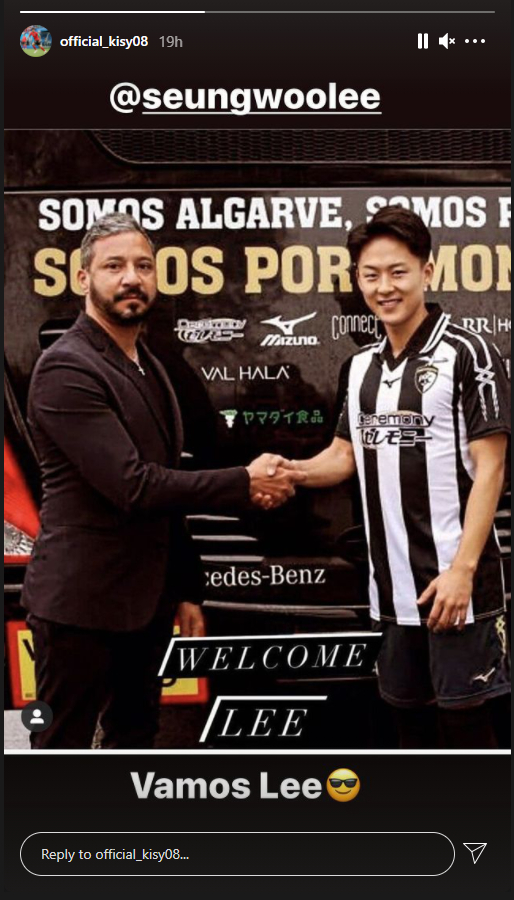 
Korean footballer Lee Seung-woo has joined Portuguese side Portimonense S.C., although the club is yet to officially announce his addition.

Portuguese media have reported that 23-year-old Lee joined Portimonense on loan from Belgian side Sint-Truidense with an option to buy in the future, although without an official announcement from either club, it is difficult to confirm the Korean star's status.

News of the move broke on social media. Although an official announcement hasn't been made, Taeguk Warriors teammate and former Swansea City midfielder Ki Sung-yueng posted a photo on Saturday of Lee wearing a Portimonense uniform and shaking hands with the club's chairman on Instagram. Lee then reposted Ki's Instagram story.

Lee's agency P&P Sport Management also posted a picture of Lee with an agent with a message congratulating the player and tagging the official Portimonense Instagram account. Lee also reposted that story.

Lee, a former child prodigy nicknamed the Korean Messi, joined Barcelona's youth academy as a teenager before briefly graduating to the "B" squad once he was old enough under FIFA transfer regulations. In 2017, Lee moved to Italian club Hellas Verona, making 37 appearances for the team across two years.

In 2019, Lee moved to Sint-Truidense, but the shortened season due to Covid-19 hampered Lee's playing time. This season he has struggled to get much time on the pitch.

Lee is a staple of the Korean national squad, having made 11 appearances for the Taeguk Warriors, including at the 2018 World Cup, even while regularly appearing for the younger age-capped squads. For the U-23 team, Lee has made six appearances, most of them at the 2018 Asian Games, where Lee scored four goals.