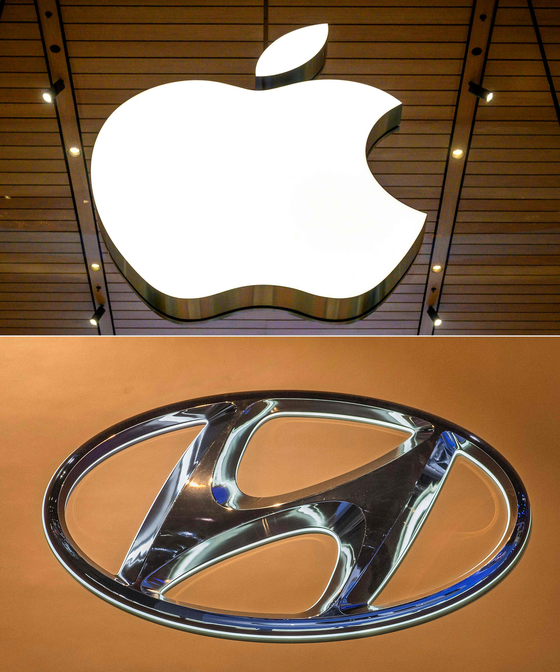 Hyundai Motor, Kia and auto parts affiliate Hyundai Mobis said Monday they are not currently in talks with Apple to develop an Apple car.

But industry watchers wondered if that was truly the end of the rumored collaboration.

“The company is not negotiating with Apple in developing autonomous vehicles,” the three companies each said through separate filings with the Financial Supervisory Service Monday morning.

Hyundai Motor said in its filing that it is “receiving requests from multiple companies on collaborating on an autonomous electric vehicle, but nothing has been confirmed yet as deals are in initial stages.”

Kia and Hyundai Mobis said essentially the same thing in their filings.

Monday was the deadline for Hyundai Motor to update an announcement it made one month ago when rumors of a potential tie-up with Apple for a self-driving electric Apple car first emerged on Jan. 8.

At the time, the Korean automaker confirmed it was in initial talks with Apple, but a few hours later it backpedaled to say that it was in talks with multiple companies — without any specific mention of Apple. It promised an update within one month.

In the intervening weeks, Kia emerged as a possible partner for the Cupertino, California-based company as media reported that it was vying to produce the cars at its Georgia factory in a potential 4-trillion-won ($3.57 billion) deal.

CNBC reported on Feb. 3 that Kia and Apple were finalizing a deal. On Feb. 6, Bloomberg reported that the talks were paused because Apple was upset about the Korean company’s initial response admitting the ongoing talks.

Although Hyundai Motor and its two sister companies claimed Monday they are not in talks with Apple to develop autonomous cars, industry analysts are skeptical.

“I don’t think the filings mean that the talks completely fell apart, but maybe they've been temporarily suspended because Apple wants to gain an upper hand in negotiations with other potential partners” said Lee Ho-geun, a professor of automotive engineering at Daeduk University.

“Apple always selects the best option out of five to six candidates when making a deal, and the media attention to a Kia-Apple tie-up should have been perceived as a negative factor by Apple,” Lee said.

A decision by Apple can be expected before May, Lee said, if it wants to meet a reported goal of producing an Apple car by 2024.

Even if negotiations resume, Hyundai Motor and its affiliates have lost credibility in the last month.

“Hyundai Motor and Kia should feel very sorry about the latest incident because keeping confidentiality in deals as big as this one is very crucial, and they showed flaws in their initial responses,” said Lee Hang-gu, a researcher from the Korea Automotive Technology Institute.

“Hyundai Motor and Kia will have to show that they are capable of pulling off a confidential deal to regain trust not only from Apple but other possible partners in the future.”