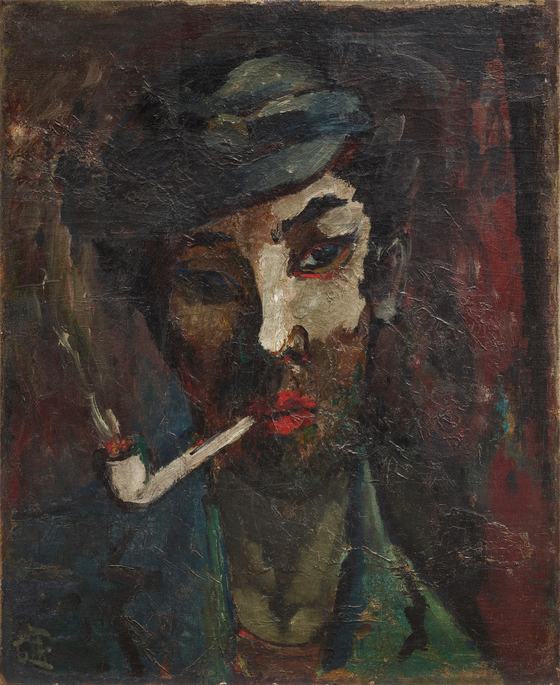 ″Portrait of a Friend″(1935) by artist Gu Bon-ung, which depicts his friend and poet Yi Sang, dubbed a ″doomed genius″ is part of the MMCA's new exhibition “Encounters Between Korean Art and Literature in the Modern Age” at its Deoksu Palace branch in central Seoul. [MMCA] 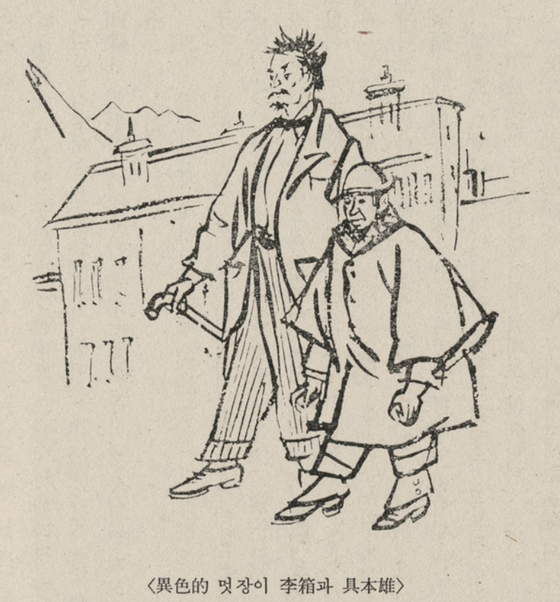 A caricature by Lee Seung-man, which depicts poet Yi Sang and artist Gu Bon-ung walking side by side. [MMCA]


Imagine you are in the now-defunct cafe Jebi, which was opened in Jongno, central Seoul, in 1934 by poet Yi Sang (1910-1937), dubbed “a doomed genius.” The space is decorated with paintings by his lifelong friend and painter Gu Bon-ung (1906-1953), often called “the Korean Toulouse-Lautrec” due to a physical disability. The National Museum of Modern and Contemporary Art (MMCA) aims to bring life to this fantasy with its newest exhibition “Encounters Between Korean Art and Literature in the Modern Age” at its Deoksu Palace branch.

Gallery 1, which has been dedicated to the four-part exhibition’s first part “Confluence of the Avant-garde,” is not a re-creation of the actual coffee shop, but it is not difficult to imagine the atmosphere of Jebi, which translates as swallow, with Gu’s paintings of strong colors and wild strokes; Yi Sang’s serial poem “Crow’s Eye View” in a news clip, full of paradox and a sense of anxiety; and some aphorisms written on the walls, which Yi Sang is said to have framed and hung in the cafe, attributing them to French poet Jean Cocteau. One of them reads, “You, untalented artists, don’t make use of your poverty.”

The paintings by Gu include “The Portrait of a Friend”(1935) which depicts Yi Sang, whose real name was Kim Hae-gyeong. With the bold contrast of grey, green and crimson colors, the portrait effectively expresses the characteristics of the poet — not only his lean and pale face and his eyes tilted upward but also the mixture of cynicism and passion in his mind. The painting also reveals that Gu was heavily influenced by the European art movement of Fauvism. He studied in Japan under Professor Katsuzo Satomi who was a pupil of Maurice de Vlaminck, the French painter who led Fauvism along with Henri Matisse.

In the gallery is also a caricature by Lee Seung-man (1903-1975), regarded as one of the greatest newspaper illustrators in the Japanese colonial period (1910-45), which depicts Yi Sang and Gu walking side by side. It is said that whenever the two walked together, they would attract attention against their will, because of Yi Sang’s height, pale face and tangled hair contrasted with Gu’s short stature and big Inverness cape coat which he would wear to hide his spinal defect. 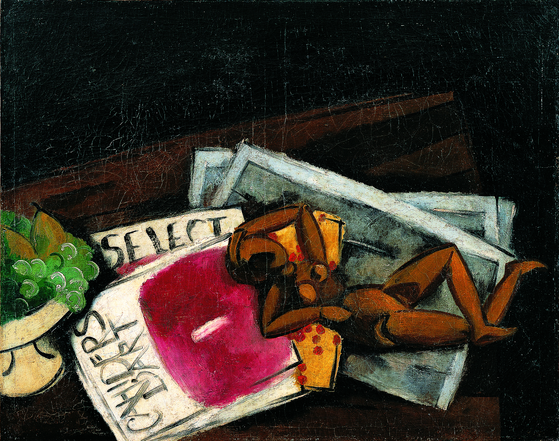 
The coffee shop Jebi was the place where not only Yi Sang and Gu but also other young artists would gather to discuss experimental projects traversing genres and fields, according to the museum. Gallery 1 also features news clips that carry some writings and illustrations by Yi Sang’s friend Park Taewon (1909-1986), who is famous not only for his novels but also for being the grandfather of Bong Joon-ho, the film director behind the Oscar-winning “Parasite” (2019).

Park’s illustrations are no less impressive than his writings, some of which use unconventional perspectives while others are like surrealist paintings. Still, he insisted that Yi Sang, who majored in architecture, should illustrate his iconic novel “A Day in the Life of Novelist Gubo” when it was published serially in a newspaper in 1934. The illustrations, as well as the simple and refined black-and-silver cover that Yi Sang designed for poet Kim Gi-rim (1908-?)’s first book, are also part of the exhibit. 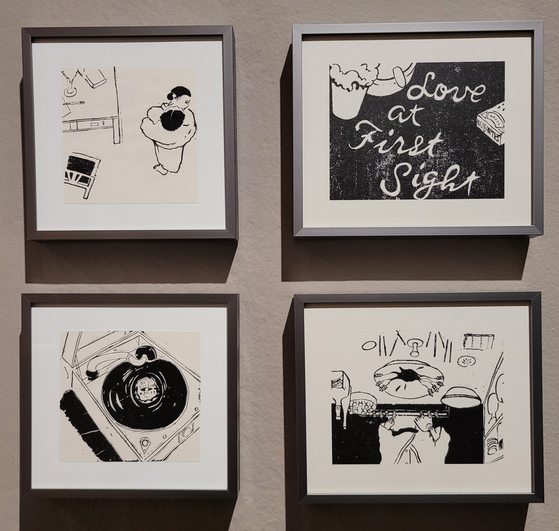 Illustrations by Park Taewon for his serial novel published in a newspaper in 1933. He is famous not only for his novels but also for being the grandfather of Bong Joon-ho, the director of the film “Parasite”(2019). [MOON SO-YOUNG]


Part 1 of the exhibition also features the literary magazine “34 Literature” which was spoken highly of by Yi Sang and linked young writers and artists of the time, including Kim Whanki (1913-1974), who later grew to be one of Korea's most important modern artists. Kim’s early abstract paintings as well as his illustrations for the literary magazine are also on view.

Among the exhibits are three artworks by the world-famous artist Yeesookyung — the only contemporary artworks commissioned for this exhibition. One of them is a screen made of crystal beads and golden leaves that depicts a peacock. “When artist Yeesookyung saw the works by writers and artists in the 1930s and heard of their exchanges with each other, she said she was surprised by the richness of the culture, which evoked the image of a splendid peacock,” explained Kim In-hye, curator of the exhibition.

Like Yeesookyung's reaction, this exhibition, which focuses on exchanges between Korean artists and writers in the 1930s and 40s and their works, may surprise Korean viewers more than foreigners, because Koreans generally have the view that the colonial period was just a dark age.

“Of course, Koreans under the colonial ruling continuously faced limits and constraints,” Kim said. “But it was still a dynamic period of transformation, in which the traditional society of the past collided with the modern society of the present, with new cultures and technologies being accepted or repelled [...] Artists and writers of the time gathered in cafes and bars, condemned the absurdity of reality, promoted their own perception of a new era, and advocated the new avant-garde of knowledge, much like the École de Paris in France.” 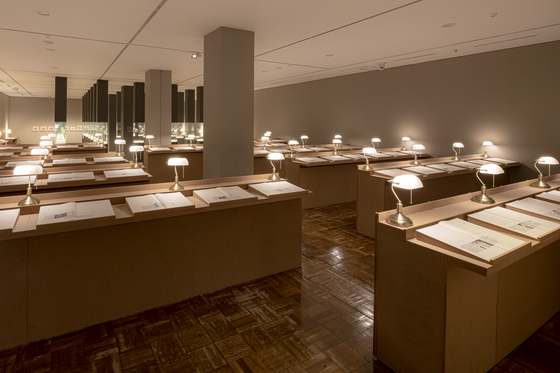 Gallery 2 of MMCA Deoksu Palace features illustrated serial novels, essays and poems in newspapers and magazines published between the 1920s and 40s. [MMCA] 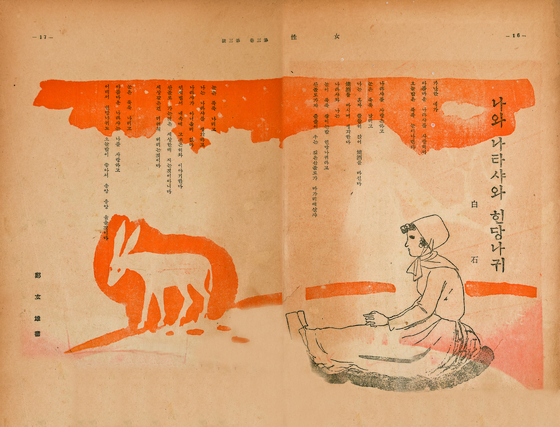 The poem ″Natasha, the White Donkey and Me″ by Baek Seok illustrated by Jeong Hyeon-ung in a magazine published in 1938. [MMCA]


The exhibition leads to Gallery 2, which is transformed into a small library for the show’s second part titled “A Museum Built from Paper.” This part features illustrations for serial novels in newspapers and the cover art for books published between the 1920s and the 1940s.

From the news clips on view, each of which carries an installment of a serial novel along with an illustration, viewers can find the names of famous illustrators and painters including Lee, Gu, Gil Jinseop, No Soohyeon and Lee Sangbeom.

“At that time, the editorial offices of newspapers and magazines served as a vital social system bringing writers and artists together,” Kim said. Much of the printed media carried not only illustrated novels but also series of illustrated essays, in particular travel essays, and illustrated poems, on which a painter and a writer collaborated in a pair. Such writings, called "hwamun," are also among the exhibits.

“The collaborations or exchanges of artists and writers are based on the East Asian tradition in which the arts of poetry and painting are considered to be fundamentally the same,” said Youn Bummo, director of the MMCA. Hwamun was the result of the combination of the old tradition and the new modern culture of printed mass media. 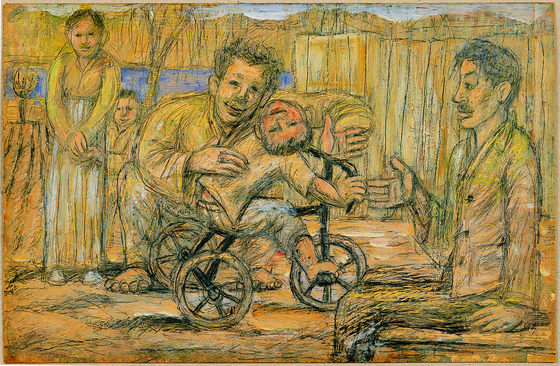 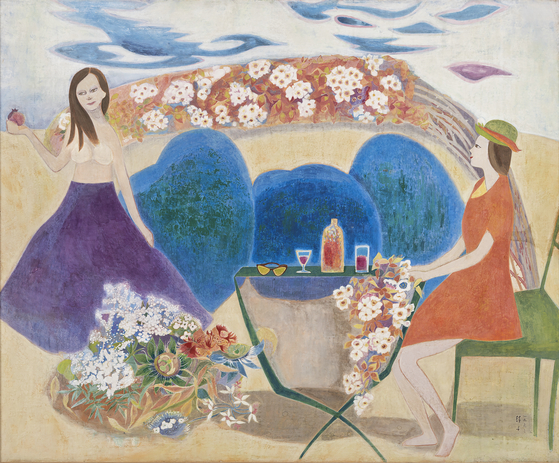 
Curator Kim said this exhibition “celebrates the achievement of cultural pioneers who actively cultivated and shared wisdom and nobility during a time of crisis and contradiction.” The exhibition even touches two of the most sensitive issues in Korean society — the division of the Korean Peninsula and Japan's colonial rule — while challenging the prejudices related to them. The show features many artists and writers who chose to live in North Korea and were removed from South Korea’s cultural history during the Cold War. It also shatters Koreans’ view that the Japanese colonial period was a barren period.

The exhibition runs through May 30 and will remain open through the Lunar New Year holidays. Admission is free, however, admission to Deoksu Palace, in which the museum is located, is 1,000 won.