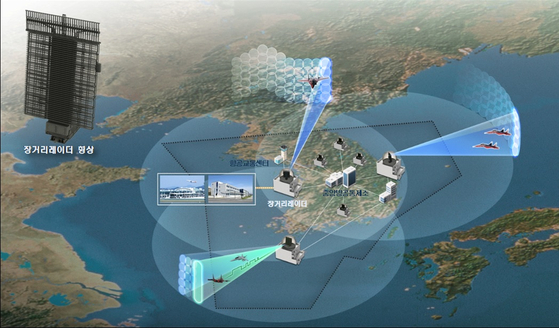 A conceptual diagram of the range covered by a long-range radar under development with Korean technology. [DEFENSE ACQUISITION PROGRAM ADMINISTRATION]

The Defense Acquisition Program Administration (DAPA) said it reached an approximately 46-billion-won ($41 million) deal with domestic arms maker LIG Nex1 to develop the new radar, with the goal of deploying the equipment from 2027.

The radar will be used to monitor and identify aircraft entering Korea’s air defense identification zone, or Kadiz, by relaying data to the Air Force’s Master Control and Reporting Center, DAPA said.

The project will pick up from an earlier unsuccessful initiative to develop a long-range radar that was suspended in 2017, based on a decision in 2019 to resume development efforts using updated technology, the agency added.

While still a joint initiative between the government and a private company, LIG Nex1 will be responsible for around 65 percent of the funding, in order to ensure it shoulders greater accountability over the development process.

A total of four years has been allocated for the radar’s development, six months less than the previous attempt, DAPA said. Developers will be required to implement features as requested by the military, employing technology acquired through recent advances in the field.

Foreign-manufactured radars currently in use to monitor Kadiz will be phased out and replaced with the new domestic equipment starting from 2027, according to the agency.

The urgency to develop a domestic aerial radar to oversee the country’s air identification zone appears to stem from the growing frequency of Kadiz violations by China and Russia in recent years.

Kadiz is not Korea’s territorial airspace, but it is customary for countries to inform each other before entering another’s identification zone.

Most recently, a total of 19 Chinese and Russian military aircraft entered Kadiz all at once without prior notice in December, prompting Seoul to scramble its own jets in response.

“Successful development and deployment of the radar will enable closer monitoring over Kadiz, and by replacing foreign-developed radars with domestic equipment we expect to provide a boon to the domestic defense industry and the national economy,” said a DAPA official.