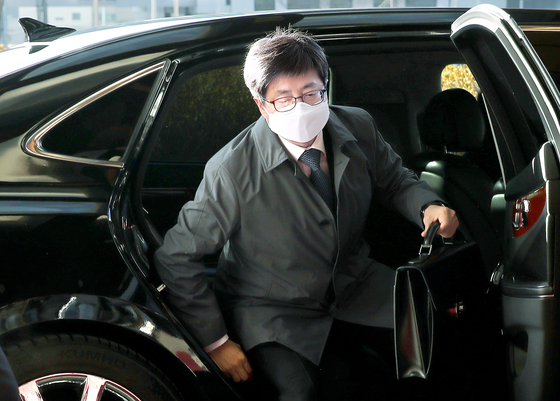 
Supreme Court Chief Justice Kim Myeong-su on Monday was greeted with a rising tide in demands for his resignation over accusations that he failed to defend the judiciary from political interference.

Kim faces widespread condemnation from various sectors of the legal profession including lawyers and judges for being complicit in the ruling party's impeachment of Lim Seong-geun, a Busan High Court judge. According to recordings released by Lim's lawyer, Kim refused to allow Lim to resign, enabling the ruling Democratic Party (DP) to pursue Lim's impeachment.

"As the truth regarding Lim's impeachment comes to light, the recordings of Chief Justice Kim show that he is no longer fit to be the head of the judiciary," a group of the association's former chairmen declared.

"Instead of trying to defend the independence of the judiciary from the ruling political forces who threaten it, the Chief Justice has prostrated himself in front of them, in the process lying to the people and insulting our constitutional history.

"The only way to save our judiciary now is for Chief Justice Kim to fulfill his duty as a public servant, apologize to the people and resign immediately," the group continued.

The ruling DP and its allies on Feb. 4 impeached Lim Seong-geun, a judge on the Busan High Court, for interfering in politically sensitive trials during the Park Geun-Hye administration. The unprecedented impeachment resolution — a first in the country's modern history — was sent to the Constitutional Court the same day for a trial. 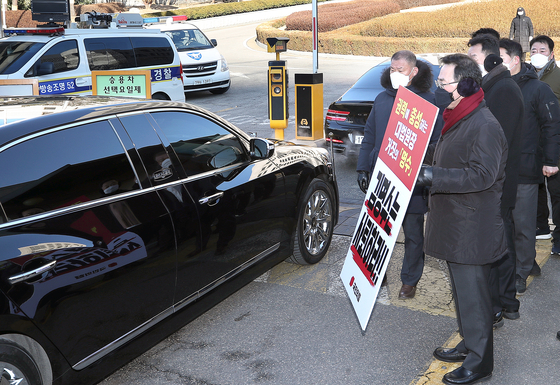 Floor leader Joo Ho-young of the People Power Party holds a sign demanding the resignation of Chief Justice Kim at the entrance of the Supreme Court as the justice's car enters the compound. [YONHAP]


That morning, a lawyer representing Lim released an audio recording and transcript of a conversation between Lim and Kim on May 22, 2020.

In the recording, Kim said he personally had no problem with Lim resigning, but he also said that ruling party lawmakers wanted to impeach Lim and that he could not deprive them of the chance to discuss the issue of impeachment without facing severe criticism himself.

The Korea Law Professors Society, which includes academics from 139 law schools across the country, also released a statement criticizing Kim.

"When looking at the Chief Justice's conduct, it seems he only looks left and right to follow the shifts in political power while totally neglecting his duty to the people," the statement read. "We question whether we can accept a chief justice who deceived the people in his role as the head of the judiciary."

The statement added, "How would the people regard a chief justice who favored judges who were members of the same research association, while overlooking other judges?

"The people do not want a judiciary that is subservient to political power," it said.

On EepanSapan, an anonymous forum for currently active judges, comments demanding the chief justice take responsibility for his comments are surging in number.

"The person who represents the judiciary has brought the judiciary into disrepute," read one comment posted on Feb. 6. Another read, "Now I can see that he was only selected [as chief justice] because he toed the official line."