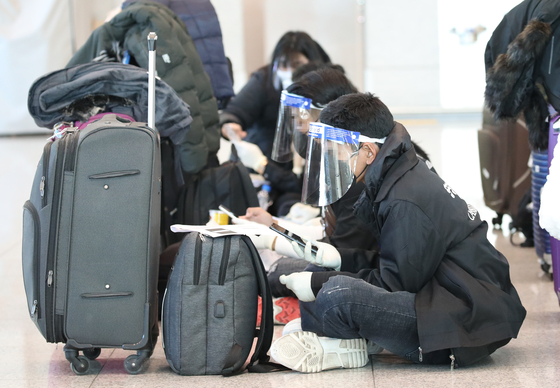 Travelers from Cambodia await transportation at Incheon International Airport Terminal 1 Monday morning. The Korea Disease Control and Prevention Agency reported 46 daily imported cases on Saturday, the highest number in that category in six months, although none from Cambodia. [YONHAP]


The Korean government announced it will tighten entry measures for travelers coming from Africa on Monday amid concerns over transmission of overseas variants.

This comes as daily Covid-19 cases in Korea dipped below 300 Sunday, the lowest figure since last November.

All passengers arriving from Africa will also be required to undergo a two-week quarantine period and take another PCR test in Korea at the end of their quarantine. Foreign visitors have already been required to provide negative PCR tests since last month.

Even people exempted from quarantine through a fast-track entry system will be required to submit a negative PCR test when entering the country from Africa, and an additional PCR test result conducted within five to seven days after entering Korea.

The KDCA confirmed three additional cases of the variant from Britain Monday. They were Koreans who had recently returned from Hungary, Poland and Ghana.

Korea has reported 54 cases of Covid-19 variants from overseas so far, known to be much more transmissible. The KDCA said that there were 40 cases of the British variant, nine of the South African variant and five of the Brazilian variant.

"There is a concern that the virus variant will spread to the local community through the infection of family members during the self-isolation period," said KDCA Commissioner Jeong Eun-kyeong in a briefing Monday. "Those who return from overseas must abide by self-isolation regulations." 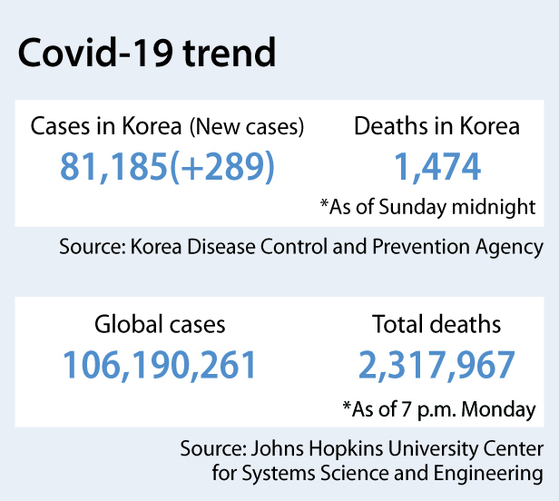 This marked the lowest daily infections since Nov. 23 amid the third wave of infections.

The 25 new imported cases included six infections from Europe, six from Africa, two from the United States, four from Russia and one from Brazil, said the KDCA. Nine cases were confirmed upon arrival and 16 in the community, while 12 were Koreans and 13 foreigners.

Of the local transmissions, 111 cases were in Seoul, 79 in Gyeonggi and 17 in Incheon as the metropolitan area added cases related to hospitals, a welfare center and an interior design company.

Some small business owners in the Seoul metropolitan area protested being excluded from the eased measures amid anticipation of picking up some business over the Lunar New Year holiday which runs from Thursday to Sunday.

However, health authorities said that it was crucial to maintain the measures because cases could spike again at any given moment in the capital area, especially amid concerns over a surge in travel over the holiday period.

Thirteen American service members and two civilian workers with the U.S. Forces Korea (USFK) tested positive for the coronavirus upon arrival from the United States, the USFK confirmed Monday.