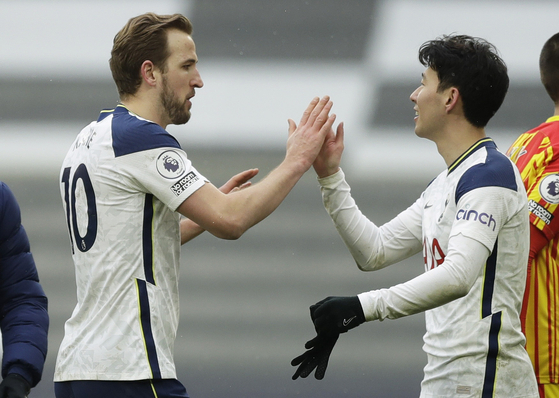 
Tottenham Hotspur are back in business.

The return of captain Harry Kane to the Spurs squad on Sunday reinvigorated the London club, with both Kane and Son Heung-min scoring in a dominant 2-0 victory over West Brom at Tottenham Hotspur Stadium in London.

With Kane back at the steering wheel, Spurs turned aggressive. As both playmaker and goalscorer, Kane was everywhere on the pitch and Son also seemed more inspired and focused with his partner back by his side.

Unsurprisingly, it was Kane that opened the scoring, but not until the second half. With West Brom on the defensive throughout the game, it was just a matter of time before somebody from Spurs scored, but the team spent most of the first half racking up missed opportunities while they rediscovered the joys of an offensive formation.

When the second half started, Kane was done waiting. A pass from Pierre-Emile Højbjerg found Kane in space in the 54th minute and the Spurs captain hammered the ball home.

Not to be outdone, Son added his name to the scoreboard just minutes later. In a blistering counterattack, a move that Son has always excelled at, Kane passed the ball to Lucas Moura who sprinted to the West Brom end of the pitch before finding Son, who needed just a single touch to take the score to 2-0 in the 58th minute.

Despite a few offensive bursts from West Brom — and two goals ruled offside — the score remained at 2-0 at full time, with Son and Kane's five minutes of brilliance ultimately deciding the day. Tottenham dominated throughout the game, with 66 percent of possession and six shots on target to West Brom's one.

Spurs' victory over West Brom shouldn't come as a huge surprise — the midlands club are currently second from last in the English Premier League and likely staring at relegation at the end of the season — but to see Spurs return to what they do best after a difficult month is still promising.

“What made me really happy was that commitment,” Mourinho said in a post-match interview. “I’m happy because of that. Then we did very good things in terms of the football we played. Yesterday, Harry was training perfectly normal. A player of his level has the experience to make his own decision.”

Spurs have had a disappointing start to 2021 after a blistering streak earlier in the season, with cracks starting to show in Jose Mourinho's offensive approach centered only on Kane and Son and perhaps overly defensive formation in big games, like against Liverpool at the end of January.

Spurs have lost their last three Premier League games, against Chelsea on Feb. 4, Brighton on Jan. 31 and Liverpool on Jan. 28, following a struggle throughout January with a couple of draws that should have been easy wins.

Son also fell into his longest Premier League dry spell of the season, going five games without a goal since Jan. 2, when he scored one in the 3-0 win over Leeds. Son scored nine goals in the first three calendar months of the season, and has so far only managed four in the following three months, although there is still plenty of football to play in February.

Spurs will be back in action in the FA Cup against Everton on Wednesday, or at 5:15 a.m. on Thursday in Korea. Their next Premier League game will be against Manchester City on Saturday, or at 2:30 a.m. on Sunday in Korea.