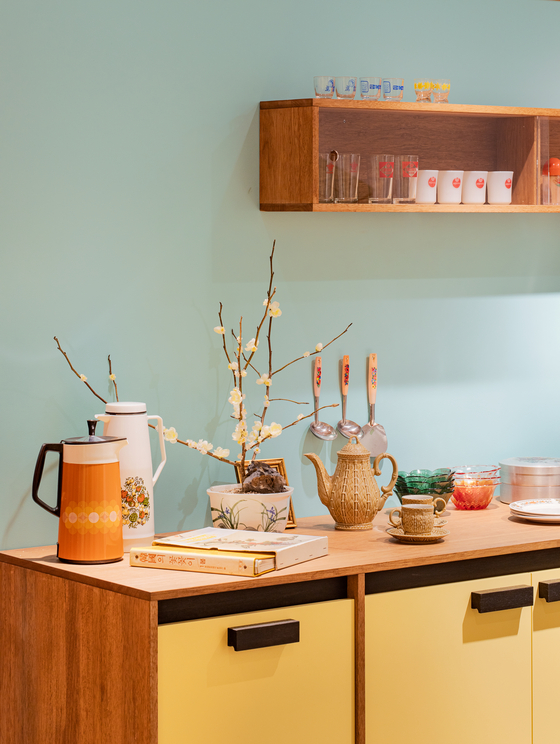 Flower patterns cover kitchenware that was popular in Korea in the 1970s-80s. [CHOI YONG-JOON]


Stacks of flower-patterned Tupperware storing side dishes sit on a kitchen bench alongside a bonsai tree and a fish tank. Next to a sink is a weighty-looking refrigerator with a logo that reads “Goldstar.” A rotary dial telephone also sits on the bench, with a thick phone book next to it. A grandfather clock, which has to have its batteries replaced regularly, gracefully chimes “ding dong” every hour.

This scene was a familiar sight inside Korean apartments in the 1970s and early 80s and has been re-created as part of a recently opened exhibition at the Hotel Anteroom Seoul’s Gallery 9.5 in Sinsa-dong, southern Seoul. 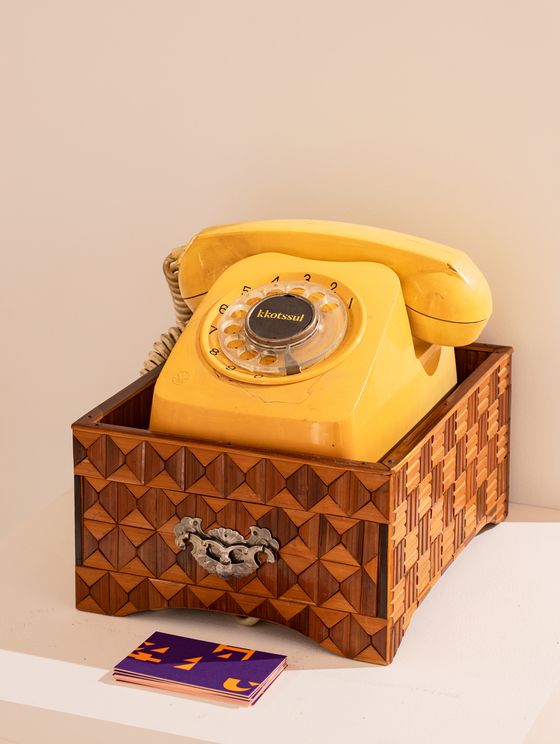 A mini drawer was used to store phone books and memo pads along with a rotary dial telephone. [CHOI YONG-JOON]


“The dazzling glory of apartments,” was the catchphrase used in the newspaper advertisement for Korea’s first apartment complex “Mapo APT” built in 1962. It was an anniversary project by the Korea National Housing Corporation. In the 1970s, during which Korea underwent rapid urbanization, the 85-square-meter (278.9 square feet) “national” housing was introduced by the government to solve shortages and soon became every middle-class Korean’s dream.

The “New Home” exhibit showcases the typical home décor in Gangnam apartments of that era and attempts to trace back the roots of modern Korean design. 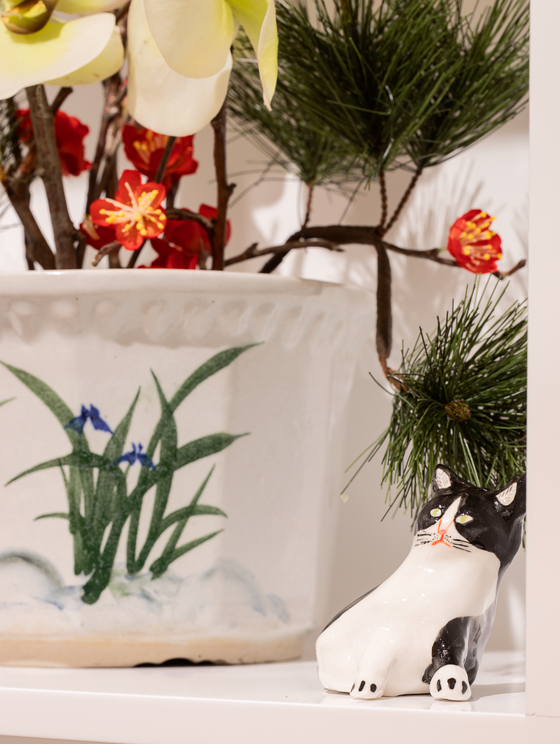 A vase from the 1970s-80s featuring a commonly seen orchid motif. [CHOI YONG-JOON]


Nowadays, apartments are familiar to Koreans as the most common form of housing, but they were an extremely unfamiliar concept at the time. People who just moved into cities from rural areas started decorating their new homes with flowers and trees, or anything that emulated something from nature.

Rattan chairs were brought in and sofas were decorated with flower-patterned cushions. Nearly all items were flower-patterned or nature-inspired, illustrating that people, who had to reside in this unified residential space of apartments, were eager to reveal their personalities through interior decoration.

“I wanted to shed light on everyday Korean design from the post-Korean War industrialization era, during which Koreans started becoming used to a more Western lifestyle,” said Lee Mee-hye, director of gallery “Kkotssul” who curated the exhibition.

“At the time, those mass-produced items were too common and copied traditional designs, so no one thought of them as valuable. In retrospect, that was the beginning of Korea’s modern everyday design.” Lee referred to designs from this era as “Korean vintage.” 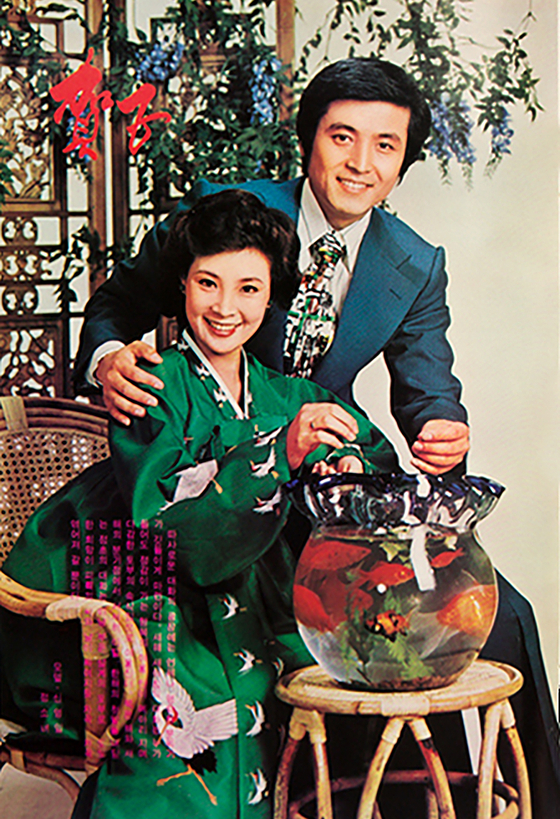 Examples of women’s magazines from the 1970s-80s which curator Lee Mee-hye referenced for the exhibition. [ANTEROOM SEOUL X KKOTSSUL] 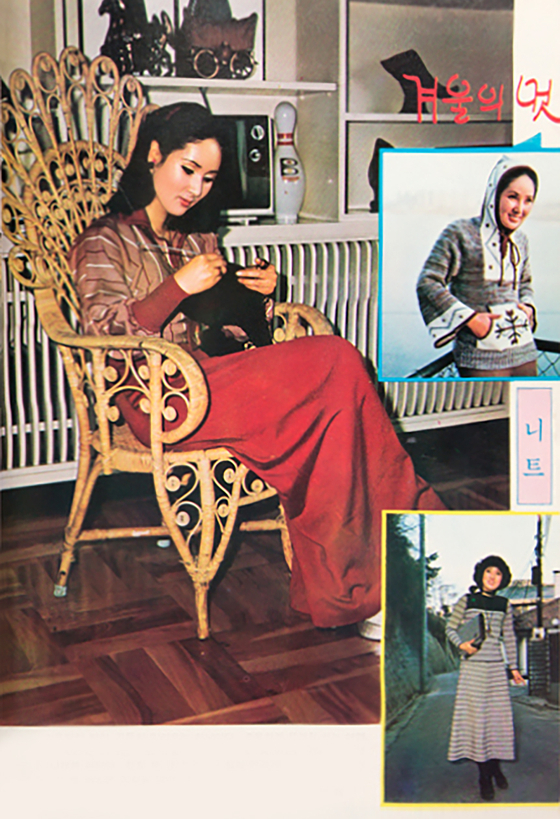 Examples of women’s magazines from the 1970s-80s which curator Lee Mee-hye referenced for the exhibition. [ANTEROOM SEOUL X KKOTSSUL]


Her primary reference source was women’s magazines of the 1970s-80s. Looking at photos showing the outfits and makeup trends of the day, Lee focused on the surroundings that gave insight into how life was back then. She referred to kitchen appliances from brands Oripyo and Hanssem which launched around that time, and started by installing a large kitchen unit in the center of the exhibition hall. For the unit, Lee collaborated with Kim Byung-kook, director of the interior design studio Marcsosa.

The mint-colored walls and lemon-colored unit seem modern and stylish, but “they are the exact color that appeared in Oripyo advertisements and magazines of the time,” Lee said. “They weren’t fully appreciated back then, but there’s a lot of pretty designs.” 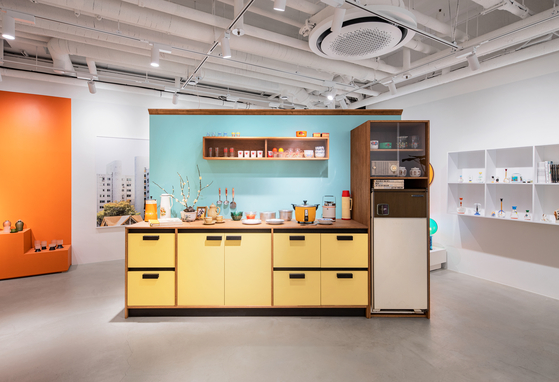 A large lemon-colored kitchen unit at the center of the exhibition is a recreation of a vintage ad. [CHOI YONG-JOON]


Lee even included her own personal collection for the exhibition as well as pieces borrowed from her friends. The star item is a Goldstar refrigerator, owned by an acquaintance of Lee’s. Goldstar was the name of LG Electronics until 1995. The fridge, which still works, has a section to freeze ice cubes; a feature rarely found in today’s fridges that instead dispense them. 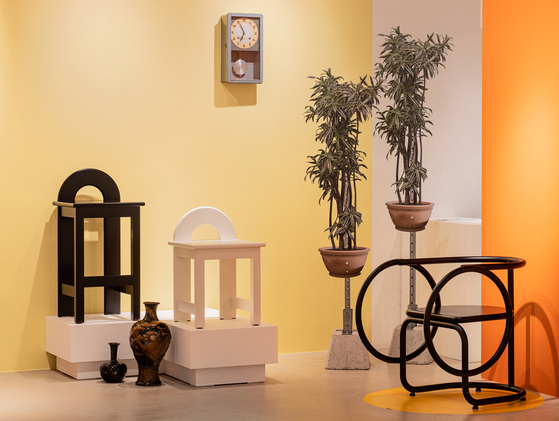 
The exhibition has more than just vintage items.

Design pieces from 15 teams of contemporary Korean artists were added for extra abundance. A chest of drawers by Studio Origin, reminiscent of a traditional mother of pearl inlay cabinet, and a rattan chair that was one of the most popular pieces of furniture in 1980s apartments, re-created by artist Seol Su-bin, are also on display.

“Families often visit, and the grandmother or father explains while their high-school-aged children marvel,” said Lee. “It’s a small exhibition, but I hope people discover the underappreciated value of Korean interior design, which was a mix of traditional and modern, real and fake.”

The exhibition runs until Feb. 28. Admission is free.