Academics in Korea and abroad are refuting claims made by Harvard Law School Professor J. Mark Ramseyer in his upcoming academic paper that "comfort women" were contracted sex workers who negotiated the terms of their employment.

The term comfort women is a euphemism referring to victims of the Japanese military's wartime sexual slavery. 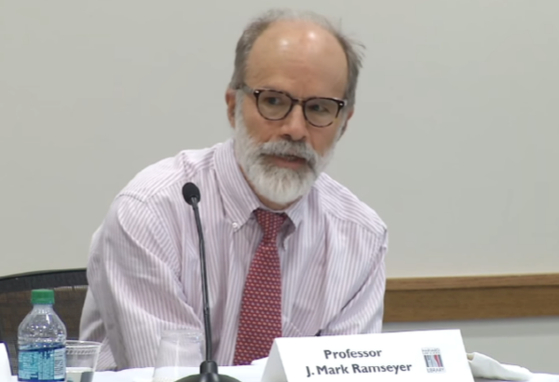 Due to be published in the March edition of the International Review of Law and Economics, Ramseyer's paper purports that comfort women were prostitutes who voluntarily concluded indenture contracts in return for large advance sums with one- or two-year maximum terms, with the ability to leave early if they paid back their debts. Ramseyer also claims that the imperial Japanese military did not play a role in the recruitment of women into sexual slavery.

Comfort women lived and worked in "comfort stations," or brothels, which operated next to Japanese military facilities to serve soldiers. Estimates of comfort women range from the tens of thousands to up to 410,000, many of Korean descent.

Ramseyer's paper has sparked condemnation from academics in the United States and Korea.

In an interview with the Harvard Crimson, University of Connecticut professor of Japanese and Korean history Alexis Dudden criticized Ramseyer's paper as a "poorly resourced, evidentially fatuous piece of scholarly production."

"It is conceptually misguided, because he's not understanding not only the context, but what actually happened," she said. Dudden also noted that Ramseyer's use of the term prostitute did not accurately convey the comfort women situation.

Yuji Hosaka, a political science professor at Sejong University and a naturalized Korean, commented that Ramseyer's argument generalizes comfort women as contract workers in a way that is not an accurate representation of the reality the women faced.

In an interview with the Korea JoongAng Daily, Hosaka said, "The idea that most of the women received large advance sums by the standards at the time, or that they went fully understanding the nature of their employment, is not accurate. There are many memoirs written by Japanese war veterans who spoke of comfort women they met, almost all of whom said they were deceived by promises of employment in other military facilities, such as kitchens.

"His sources almost exclusively refer to recruitment before February 1938, when the Japanese Home Ministry belatedly gave secret leeway to brothel recruiters who held a license from the military," Hosaka pointed out. "From 1938, the Japanese military granted and controlled recruitment permits of brothel owners. The military was certainly complicit in sexual slavery perpetrated by its own licensed recruiters."

News of Ramseyer's paper led to both the Korean Association of Harvard Law School and the undergraduate Korean International Students Association at Harvard issuing statements on Feb. 4 and Feb. 8 condemning Ramseyer's arguments as factually inaccurate and misleading.

In a statement signed by over 900 students and graduates, mostly of Korean or Asian descent, at U.S. law schools, the Korean Association of Harvard Law School criticized Ramseyer for his failure to consult Korean perspectives on comfort women and for echoing Japanese neo-nationalist claims that the issue is "pure fiction."

The association said, "He does not engage with the historically validated and important perspectives of scholars who have worked to amplify the testimonies of these women. To ignore this work is to create the false impression of a settled history of an imagined world where Korean comfort women were free to contract for higher wages paid at their preferred schedule."

The Korean International Students Association at Harvard issued its own statement, saying it would push for an apology from Professor Ramseyer to surviving comfort women "for undermining the integrity of their lived experiences and testimonies."