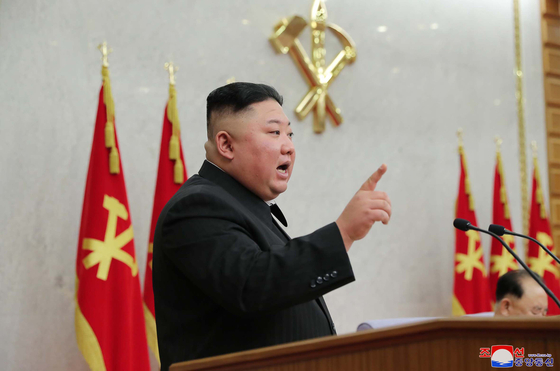 Presiding over the meeting, Kim delivered a report blasting the state's economic guidance organs for their soft-pedaling on setting economic goals for the year, KCNA's English-language report said.

Kim commanded a "serious study" be made towards "thoroughly overcoming negative elements obstructing the socialist construction at present," calling for further consolidation of the party on organizational and ideological terms, while "enhancing the militant function and role" of party institutions.

Such rhetoric has become a routine in Kim's public addresses since last year, when he made several concessions of the regime's economic shortfalls.

The year 2020 proved to be an annus horribilis for the North, which faced a trifecta of calamities starting with trade tying up due to Covid-19-related border restrictions, intense typhoons in the summer and continued strain brought on by international sanctions.

The party congress in early January, the second such event in several decades, was held to set a new five-year economic plan and shore up unity ahead of what is expected to be sustained hardships down the line.

Following up on the objectives outlined during the congress, Kim's report on Monday detailed production targets for the country's steel and chemical industries, along with other key industrial sectors such as transport, construction, light industry and commerce, according to KCNA.

Participants of the meeting, ranging from Central Committee members to leading party ministerial cadres and provincial officials, unanimously approved the leader's agenda and then "reproached themselves" for their failures so far in carrying out the new five-year plan, KCNA added.

Experts in Seoul noted Kim's continued attention to economic matters even after January's congress suggested the dictator aims to strengthen his direct authority over the economy, in contrast to the relatively more hands-off approach of his predecessors.

The fact that officials overseeing all levels of the economy, from planners down to factory managers, partook in the meeting suggests Kim is exercising tight control over implementation of the five-year plan starting from year one.


Kim is likely to go on to address some of the other objectives set during January's congress, including the regime's continuing nuclear and ballistic missile development and foreign policy toward the United States.

The KCNA said Monday's plenary meeting would continue on, hinting that the event would be a multiple-day event, unlike most previous party central committee sessions.

Following the party congress last month, Kim foreswore any further negotiations with Washington until it called off its "hostile policy" toward Pyongyang, and said that the North would augment its nuclear arsenal without interruption in the meantime.

But the chance that the new Biden administration would roll back on a pressure strategy toward the regime has proven slim, with top U.S. officials — including Secretary of State Antony Blinken — hinting at additional sanctions.

Such measures, however, could very likely push Pyongyang toward resuming nuclear and long-range missile testing and plunge the peninsula back to a state of intense military tension as seen in 2017.