Medical workers and participants of a mock drill are on standby, at the National Medical Center in central Seoul on Tuesday, to run through the administering of Covid-19 vaccines as the government announced inoculations could begin on Feb. 26. [JOINT PRESS CORPS]

The Korea Disease Control and Prevention Agency (KDCA) said that 24 new patients were infected with the variant from Britain and one each with the South African and Brazilian variants.

Four new patients with the British variant were infected through domestic transmissions, the KDCA said. They are linked to a cluster of infections from a Syrian traveler who flew in from the United Arab Emirates in December and has infected relatives in South Gyeongsang and South Jeolla.

The other 22 new variant cases were infected overseas from countries including Hungary, Poland, Ghana and the United States. There were 20 Koreans and six foreigners newly infected with variants.

This brings Korea's total number of identified variant infections, seen to be more transmissible, to 80 cases — 64 of the British variant, 10 of the South African and six of the Brazilian.

Korea plans to start Covid-19 vaccinations on Feb. 26, the KDCA announced Tuesday, so long as the Ministry of Food and Drug Safety gives final approval for the use of AstraZeneca's vaccines for seniors.

AstraZeneca is expected to begin delivery of its first batch of vaccines, enough to inoculate 750,000 people, to Korea starting Feb. 24. The vaccines are expected to be distributed to medical facilities the following day. 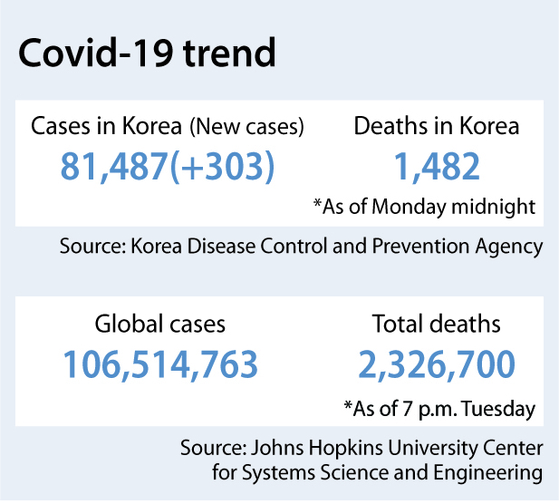 The batch is expected to be vaccines manufactured by SK Bioscience in Andong, North Gyeongsang, after the government inked a contract to locally manufacture Covid-19 vaccines with the Britain-based drug company AstraZeneca.

The Korean government on Tuesday conducted a mock drill to run through the administration of Covid-19 vaccines, including dealing with possible adverse reactions such as allergies, and to create a guideline for state-run vaccination centers.

Frontline medical workers and elderly people at nursing homes will be the first groups to get their vaccines. However, there have been various concerns over the Oxford-AstraZeneca vaccine being less effective in people over 65 and its poor initial results in fighting off the South African variant.

Prime Minister Chung Sye-kyun said Tuesday that the Pfizer vaccine expected to be delivered through the Covax Facility is expected in “late February or early March.”

Korea saw cases rise past 300 again as health authorities are on high alert ahead of the Lunar New Year holiday, a period of increased travel as people visit relatives in their hometowns, which could result in widespread virus infections.

The figures are slightly up from 289 cases the previous day, which marked the lowest daily infections since Nov. 23 amid a third wave of infections in the country.

Of the local infections, 86 cases were reported in Seoul, 111 in Gyeonggi and 14 in Incheon.

At least 53 Covid-19 cases are linked to two clusters of infections in Bucheon, Gyeonggi, as of Tuesday.

So far, 20 cases are linked to a religious facility and another 33 are students and lecturers from a cram school.

Bucheon city officials said they suspect there could be a link to the two clusters as one lecturer visited the religious facility.

The government extended operating hours of restaurants, cafes and fitness centers outside the Seoul metropolitan area by one hour to 10 p.m. The 9 p.m. closures were maintained for businesses in Seoul, Gyeonggi and Incheon, where the highest number of infections is concentrated.

A ban on gatherings of five or more will be kept through at least Saturday, when the government is expected to review its social distancing guidelines.

Health authorities urge against travel during the Lunar New Year holiday, which kicks off Thursday.

The Korean government suspended flights arriving from Britain since Dec. 23, set to run through at least Feb. 11.

All foreigners arriving in Korea must present a negative polymerase chain reaction (PRC) test taken within 72 hours of their departure.