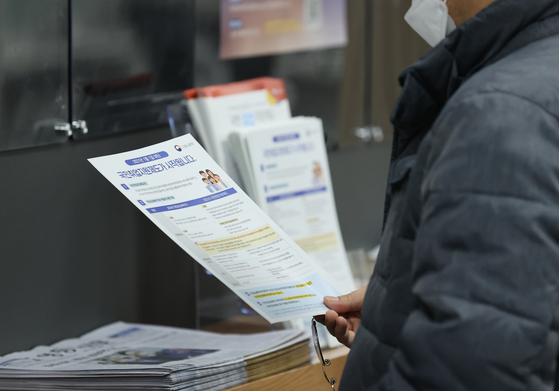 A job seeker looking at a booklet introducig government job programs at a center in Yeongdeungpo District on Feb. 3. The Statistics Korea on Feb. 10 announced that Janaury reported the worst job losses since the IMF crisis. [YONHAP]


Nearly one million jobs were lost in January, the largest number for a single month since the Asian economic crisis of the late 1990s.

The number of unemployed people jumped 36 percent to reach 1.57 million.

According to Statistics Korea on Wednesday, 25.8 million people were employed in January — a decline by 982,000, or 3.7 percent, from a year earlier.

This was the biggest number of people losing their jobs since December 1998's 1.28 million. Last December, 628,000 jobs were lost.

As of January, the number of people employed had shrunk for 11 consecutive months. 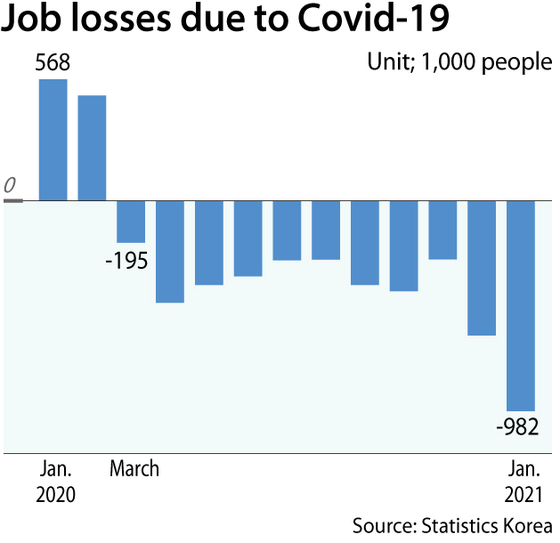 The record for consecutive months of job losses was 16 between January 1998 and April 1999.

Covid-19 social distancing restrictions have had a devastating effect on small businesses that offer face-to-face services.

Restaurants and accommodation businesses account for 7.6 percent of jobs in the country, while wholesale and retail account for 13 percent.

Even manufacturing, which accounts for the biggest percentage of jobs in the country, 17 percent, suffered from Covid-19 restrictions. Manufacturing lost 46,000 jobs, which was a decrease of 1 percent year-on-year.

The number of unemployed people in Korea amounted to 1.57 million in January, the largest since data began being compiled in its current form in June 1999. When compared to a year earlier, there were 417,000 more unemployed people, a 36.2-percent increase.

People giving up on finding work increased as well.

The economically inactive population last month totaled 17.58 million, an increase of 5.2 percent from a year earlier, and among those people, 775,000 said they had given up in seeking jobs, which was 233,000, or 43 percent more than a year ago.

All age groups saw jobs decline year-on-year, a contrast to past months when jobs for people 60 or older increased, largely thanks to government jobs created by the Moon Jae-in government.

It was the first decline for people in their 60s or older in more than a decade.

“We solemnly recognize the severity of the current situation,” Hong wrote.

He said the government will quickly complete a third round of emergency relief grants.

According to the Ministry of SMEs and Startups on Wednesday, 97 percent of those emergency relief grants have been delivered to small shops.

Hong did not mention a fourth round of emergency relief grants, which the Democratic Party has been promoting.

Covid takes a toll on all types of indoor businesses