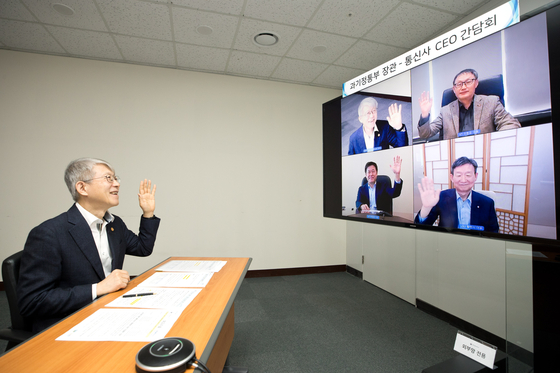 Choi Ki-young, Korea's minister of science and ICT, holds an online conference call with CEOs of three major mobile carriers of the country — SK Telecom, KT and LG U+ — on Tuesday at its headquarters in Sejong. [MINISTRY OF SCIENCE AND ICT]


Video calls will be free over the Lunar New Year holiday, for those at least who still make such calls as mobile phone calls rather than via third-party services, such as Skype, which utilize data.

Korea's Science and ICT Minister Choi Ki-young and CEOs of three major mobile carriers of the country — SK Telecom, KT, and LG U+ — on Tuesday held an online conference call and came up with a plan that allows Koreans to make free video calls during the Lunar New Year holidays as part of efforts to lessen the financial burden of people who wish to stay in touch with their families instead of visiting them amid the coronavirus pandemic.

All people who own smartphones that offer video call services from the three large mobile carriers, as well as people who have altteul phones, a low-end mobile telecom service, will be able to use the free service.

Pre-paid phones and voice-over-internet-protocol calls, such as those over Skype and over KakaoTalk’s VoiceTalk, are excluded from the deal due to some technical issues, according to the Ministry of Science and ICT. iPhones are also excluded.

It is not clear how useful the promotion will be, as third-party services dominate the video call market, and many customers are on unlimited plans anyhow. The ministry didn't even know. For those who are still on capped plans, they will not lose minutes if they make video calls. For those who are still charged per call, voice calls are about 1.98 won ($0.002) per second and video calls are 3.3 won per second. Over the holidays, they will not be charged the 3.3 won per second. 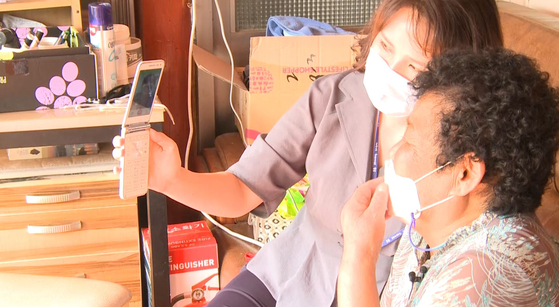 An elderly woman speaks over video call with her family with the help of a public official during last year's Chuseok harvest festival in Wando, South Jeolla. [JOONGANG PHOTO]


“As deterioration in sound quality is expected at certain times such as the morning of Lunar New Year’s Day, if many people make calls at a time, avoiding busy hours is recommended,” said Heo Seong-wook, head of the office of network policy in the Ministry of Science and ICT.

The Ministry of Science and ICT and the three mobile carriers also came up with a plan that can support self-employed people who are having a tough time due to the sharp decline in sales after the virus outbreak.

Currently, each of the three mobile carriers has been offering a mobile plan that benefits small-business owners: SK Telecom’s Success Dream Plus package, KT’s Soho Success package and LG U+’s Our Store package. Those packages offer users various benefits, such as allowing them to connect 10 devices to one Internet service.

All small-business owners who have been using those packages will be offered an additional 50 gigabytes of data per month for two months.

Self-employed people who run PC rooms or accommodation businesses who wish to halt services due to financial difficulties will be able to do so for six months rather than the usual three.

Support for low-income households, elderly people and people with disabilities will also be expanded.

All elementary, middle and high school students from low-income households will be allowed to access educational content from Korea Educational Broadcasting System for free through their smartphones. The government and mobile carriers will split the expenses.

“The supportive measures will be a big step toward realizing an inclusive society beyond just an attempt to reach economic recovery in order to overcome the Covid-19 pandemic,” said Choi.