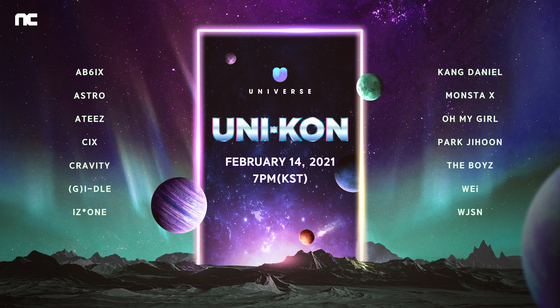 The poster for the upcoming concert ″UNI-KON″ by entertainment platform Universe, operated by NCSoft and its subsidiary Klap. [KLAP]

The concert titled “UNI-KON” will stream live through Universe’s official channel from 7 p.m.

The concert is to mark the launch of the new platform and encourage K-pop fans from all around the world to meet their favorite stars. Fans can join the channel from 6 p.m., and the entire concert will last for about four hours. Universe users will have access to the four-part concert for free.

A total of 14 acts including Kang Daniel, The Boyz, Monsta X, Astro, IZ*ONE and (G)I-DLE are set to perform. IZ*ONE will also debut its new song “D-D-Dance” released on Jan. 26.

The concert will also be provided as video-on-demand for those who want to watch it at a later time. The organizers said they will release behind-the-scenes content and interviews at a later date.