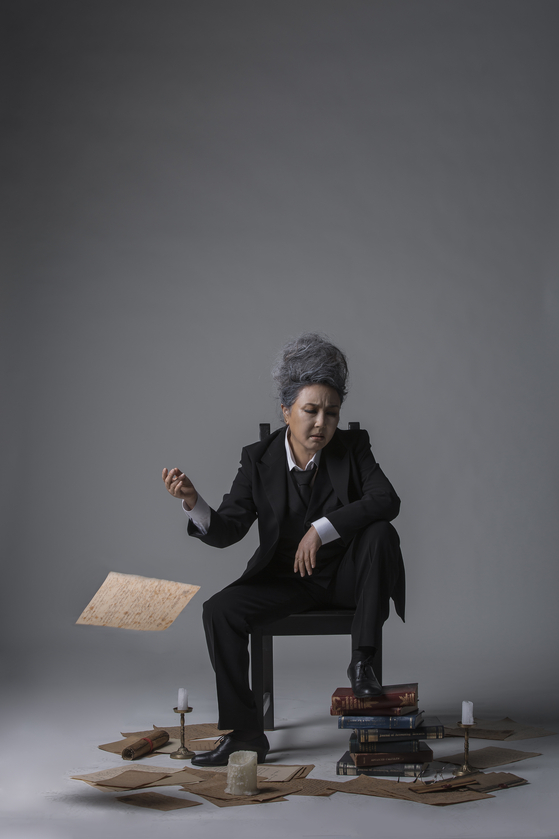 Veteran actor Kim Seong-nyeo will take on the role of the world's first female Faust in ″Faust Ending,″ which will take place from Feb. 26 to March 28 at the Myeongdong Theater in central Seoul. [NATIONAL THEATER COMPANY OF KOREA]


Meet 70-year-old Kim Seong-nyeo, one of Korea’s leading actors and a female Faust.

Two years ago, Kim got a call from director and playwright Cho Kwang-hwa. He asked her to take part in the play “Faust Ending,” which was put together as a celebration of the 70th anniversary of the National Theater Company of Korea last year. Her first reaction: “Why?"

“I asked him why, when I got the call to do ‘Faust Ending.' 'What would I do? I can’t play the young and pretty Gretchen,’” she told the JoongAng Ilbo, an affiliate of the Korea JoongAng Daily in an interview on Feb. 5.

“Then he said, it was going to be a female Faust. I didn’t hesitate. I said, ‘I’ll do it!’ It was going to be the world’s first female Faust.” (The performance, which was initially planned to be staged last April, was postponed amid the coronavirus and in the meantime, a play in London premiered in which Faust is turned into a young woman.)

“Faust” (1832) is a classic by Germany’s most esteemed writer Johann Wolfgang von Goethe (1749-1832), based on a German legend. The protagonist Faust is an old scholar who has mastered all the arts and sciences. He falls into an abyss of displeasure after feeling the futility of life. He makes a pact with the devil Mephistopheles and develops a desire for the young and innocent Gretchen. The contradictions and conflicts of an erudite mind and lustful body lead the whole play, and through the hands of director Cho, a new “Faust Ending” was created.

“But wait, a female Faust? I started thinking,” said Kim. “How was I going to unravel this? Everybody knows Faust as a male, so how was I supposed to play the character?”

The biggest obstacle would be Faust’s relationship with Gretchen. In the gender swap for Faust, would Gretchen also need to transform into a young and innocent man?

“But will the audience be able to forgive the love between an old woman and a young man?,” she said. “I came to the conclusion that Gretchen had to be left as a woman. But instead of the physical love, it would be the compassion between humans and the empathy between the same genders. There was even a kissing scene between Faust and Gretchen, but I suggested to take it out.”

So for the first female Faust to be portrayed in 190 years, neither femininity nor masculinity dominates each other. She enunciates the words of an old man in a feminine voice, while keeping his nuance. Kim described it as “a neutral color, if it must be named.”

“The old scholar’s thoughts linger on completing the perfect humanity. The director said that he made [Faust] female because he didn’t need to be male, but on the flip side, she doesn’t need to be female, either. So I tried to change the color of the gender by starting neutral and developing a sense of maternity through the encounter with Gretchen."

“Faust Ending” was supposed to go on stage in April last year. The Covid-19 pandemic had already forecast a rough storm for the play, but even worse, Kim had a fall while practicing just five days ahead of the first show.

“There is a scene where Faust makes a pact with the devil, spins around and then gets off the stage. That particular day, there were a lot of pieces of paper lying around and I spun my way with joy — until I tripped on a piece of paper. I flew up in the air then fell right down. I dislocated my shoulder and it hurt so much,” she said. With the two misfortunes combined, “Faust Ending” was postponed until this year and will finally stage its first performance on Feb. 26. The play will run until March 28 at the Myeongdong Theater in central Seoul. 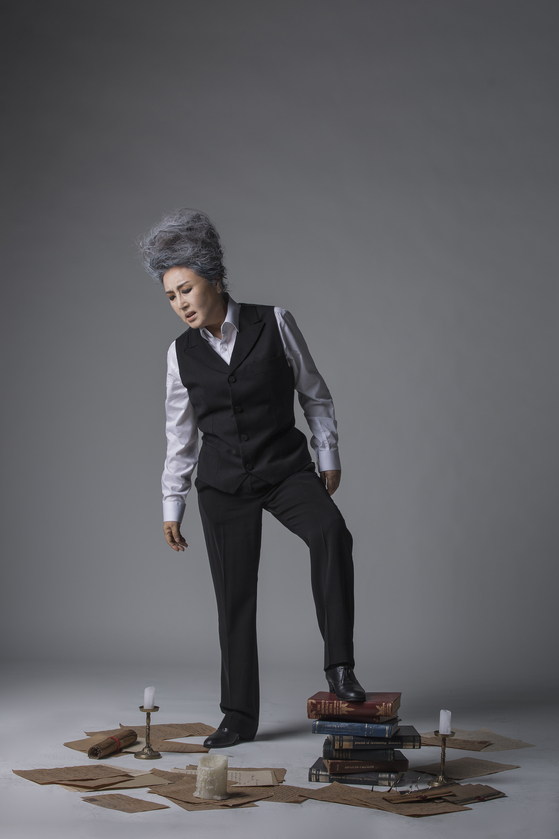 Veteran actor Kim Seong-nyeo will take on the role of the world's first female Faust in ″Faust Ending,″ which will take place from Feb. 26 to March 28 at the Myeongdong Theater in central Seoul. [NATIONAL THEATER COMPANY OF KOREA]


“The play has changed quite a bit since it was first supposed to be staged,” Kim said. Director Cho practically rewrote the last act so that “Faust Ending” would be a work that clearly shows the face of humanity that hurts each other.

“I was very excited while I was practicing for the play last year to think that I would be the world’s first female Faust, but looking back, I used a lot of my energy,” said Kim, adding that due to the postponement she was given more time to think about the message that Faust wants to send. “I would like people to come watch this play wondering what the female Faust will be like, but go home thinking about the question of what the work is trying to ask. I want them to ask, ‘How are we, human beings, to live in this world with the virus, environmental pollution and people bringing each other down through vicious comments?’”

Kim made her debut on stage in 1976 and has been active in the fields of plays, musicals and even changgeuk, a Korean traditional play style. She even helped revive madang nori (a traditional Korean play combining various elements of folk entertainment) during the 1980s and '90s and was dubbed the “madang nori queen” in the industry.

“When I was doing a play, [senior actor] Jang Min-ho would say, ‘Just do plays now.’ Maestro Park Gwi-hee who taught me gayageum [Korean traditional zither] chorus said ‘Just do guggak [Korean traditional music].’ But I tried many things, so I ended up having an identity that wasn’t defined by guggak or acting. It made me lonely not to be able to belong anywhere, but I guess that’s what’s gotten me this role as the female Faust,” she said.

“This is the first time in my life that I’m going all-in as an actor,” said Kim. She had been the director of the National Changgeuk Company of Korea from 2012 to 2019. She also stopped teaching at universities last year.

“For me, it’s now about how to end my life as an actor well. It’s not about getting good roles or getting respected anymore. I would like to act as the old person just standing at the back of the stage and help out in ways that an old actor can. Can you please write in this article for people to call me if they need an actor for a small role as an old person?"