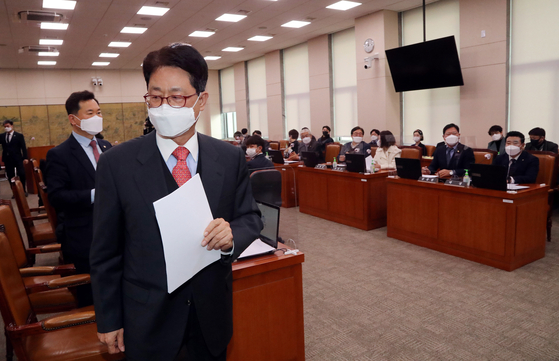 Rep. Lee Dal-gon, front, of the opposition People Power Party leaves a meeting of the National Assembly's Committee on Culture, Sports and Tourism on Wednesday after protesting the ruling Democratic Party's endorsement of Rep. Hwang Hee as a new minister of culture. [YONHAP]


President Moon Jae-in on Wednesday appointed a two-term lawmaker as minister of culture, sports and tourism.

Hwang is the 29th minister-level official of the administration to assume the post without the main opposition party's agreement.

Earlier Wednesday, the National Assembly's Culture, Sports and Tourism Committee adopted the confirmation hearing report, allowing Moon to name Hwang as minister of culture. The ruling party led the passage of the report, despite the main opposition party's protests.

Lawmakers from the opposition People Power Party (PPP) opposed. They said Hwang is unfit to serve due to ethical lapses and suspected plagiarism of his doctoral dissertation.

"The suspected plagiarism in his dissertation is so serious that it makes us wonder if he actually wrote any part of it," said Rep. Lee Dal-gon of the PPP. "We think this is a crime."

"We see no ability or professional qualification for him to serve in this post," said another PPP lawmaker, Kim Seung-su. "We cannot agree with this appointment. This is not my personal opinion. This is the unanimous opinion of PPP lawmakers."

DP lawmakers said they saw no reason to disqualify Hwang.

After an hour of bickering, Do Jong-hwan, chairman of the committee, called for a vote. PPP lawmakers left the meeting in protest, and the DP lawmakers approved the confirmation hearing report.

If Moon formally appoints Hwang, he will be the 29th minister-level official of the administration to assume the post without the opposition party's agreement.

Moon nominated Hwang, a two-term lawmaker from the DP, as culture minister on Jan. 20. The PPP immediately questioned Hwang's ethics and integrity.

One of its allegations was that Hwang committed plagiarism in his doctoral dissertation for Yonsei University on urban planning. The PPP said Hwang's dissertation in the English-language was a word-by-word translation of a research report commissioned by the National Assembly's Land and Transportation Committee. The PPP demanded Hwang submit a Korean-language version of his dissertation before the confirmation hearing, but Hwang refused to do so, insisting he only has the English-language version.

Hwang was also criticized for taking a sick leave to skip a National Assembly voting session in July 2017 and then going on a family trip to Spain. "When we planned the trip, the voting session had not been scheduled," Hwang said Tuesday during the confirmation hearing. "I acted very inappropriately, and I apologize." 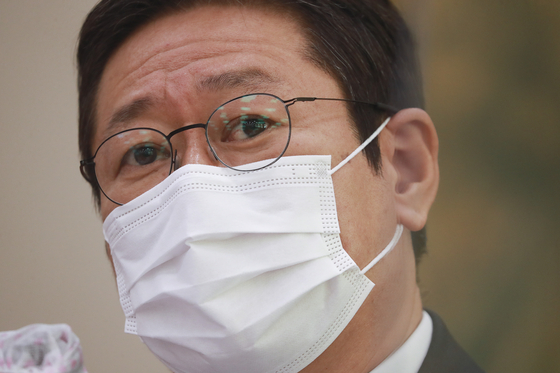 Democratic Party Rep. Hwang Hee, nominated as the minister of culture, sports and tourism, apologizes during the confirmation hearing on Tuesday that he had taken a sick leave to miss a National Assembly voting session in 2017 and gone to a family trip to Spain. [NEWS1]

Hwang is known for expertise in urban planning. When media pointed out his lack of experience in the field of culture, sports and tourism, the Blue House said Moon selected Hwang because of his policymaking and communication skills.

Hwang is a longtime supporter and strategist of Moon. He is also a member of a fraternity of Moon loyalists known as the "Owl Alliance." The name came from the idea that its members will protect Moon day and night, like owls. The group publicly dismantled in 2018, after it was criticized for encouraging factionalism, but key members including Hwang launched a new group called the Democracy 4.0 Research Institute last year.