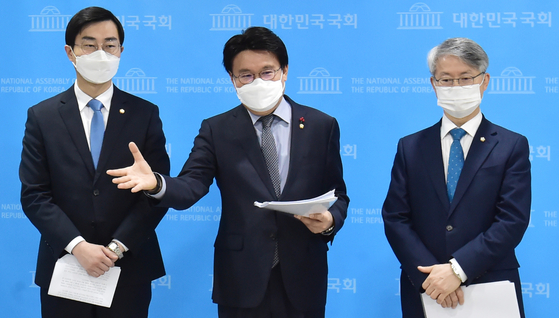 Rep. Hwang Un-ha, center, of the ruling Democratic Party explains a bill designed to take away all investigative powers from the prosecution and give them to a new investigation agency. [NEWS1]


Hardline lawmakers of the ruling Democratic Party (DP) are pushing for a plan to completely take away investigative powers from the prosecution and launch a new investigation agency.

A coalition of DP lawmakers including Reps. Hwang Un-ha, Kim Nam-kuk and Kim Yong-min and Rep. Choe Kang-wook of the Open Minjoo Party held a press conference on Tuesday to discuss a bill to establish an agency for investigating serious felonies.

"We will remove the direct investigation power from the prosecution, which the prosecutors have long abused, and hand it over to the new agency," said Rep. Hwang. "By doing so, we will create a criminal justice system where investigation and prosecution are completely separated."
Since President Moon Jae-in took office in May 2017, the administration and the ruling party have pushed forward a series of reform measures to weaken the power of state-run agencies, particularly the prosecution. The Corruption Investigation Office for High-ranking Officials (CIO) started its operation last month, and measures to reform the National Intelligence Service and give more power to the National Police Agency were also introduced last year, despite protests by the opposition.

The reform measures to rein the prosecution are largely focused on taking away its investigative powers. Following the series of changes, the prosecution is currently left with powers to investigate six particular types of major crimes. These six types of felonies are corruption such as bribery and political funding law violations; economic crimes such as fraud; violation of laws governing public servants; election law violations, crimes concerning procurement projects and large-scale accidents involving high casualty.

The police currently has the power to investigate misdemeanors. The CIO has jurisdiction over 6,500 senior officials, including the president, cabinet members, lawmakers, judges and the prosecutor general and prosecutors. Heads of local governments and education offices and senior police and military officers are also to be investigated by the CIO.

The lawmakers said a prosecutor's direct interrogation of a witness or suspect, although not unusual in Korea, is an extraordinary system in other countries. They said the prosecutors should only be responsible for filing indictments and making arguments against the accused in trials.

The lawmakers who proposed the bill said the change is necessary in order to stop the prosecution from conducting political probes.

According to the proposed bill, a recommendation committee will nominate two candidates to head the new investigation agency for serious felonies for the president to choose from. The nominee will undergo a confirmation hearing by the National Assembly.

The head of the new agency must have more than 15 years of experience as a judge, prosecutor or lawyer or have worked as a public servant in charge of investigative duty.

Investigators for the new agency will be categorized as judicial police under the Criminal Procedure Act. Incumbent or former prosecutors are allowed to join the agency, but they cannot comprise the majority of the new agency.

The bill does not say which ministry will oversee the agency. "It should have been under the Ministry of Interior and Safety, but lawmakers had different opinions on whether it should be governed by the Justice Ministry or the Interior Ministry," Hwang said. "The party's special committee on prosecutorial reform will further discuss the issue."