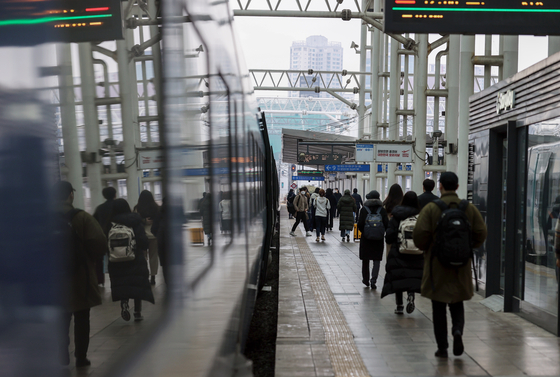 Passengers line up to take the KTX to Busan at Seoul Station Wednesday as the government advised people not to travel over the four-day Lunar New Year holiday, which kicks off Thursday. [YONHAP]


Korea's daily Covid-19 cases rose above 400, the highest figure in nearly a week, as health authorities Wednesday warned of emerging clusters of infections and urged caution ahead of the Lunar New Year holiday.

In Bucheon, Gyeonggi, infections at a complex run by Victory Altar, a Christian new religious movement, and a nearby hagwon, or cram school, in Ojeong District has led to a paired cluster of at least 96 coronavirus patients as of Wednesday.

Health officials said that a lecturer at the hagwon in his 50s who resided at Victory Altar’s Seungni Jedan complex is seen as the link between the two clusters.

A student at the hagwon was initially confirmed coronavirus positive Sunday after showing symptoms the previous day. The lecturer tested positive Monday and was later found to be a resident of the Victory Altar dormitory who has been teaching classes despite showing Covid-19 symptoms since Feb 3.

At least 33 people — 25 students, five family members and three lecturers — were found to have been infected through the hagwon, health officials confirmed Wednesday. The Victory Altar cluster saw 20 cases, including 16 people living in the male dormitory, one in the female dormitory, two at an apparel factory where the worshippers work and one church orchestra member.

The Bucheon city government banned gatherings at the Seungni Jedan complex and ordered 270 close contacts to be tested. Bucheon city officials said that they have received a list of 139 Victory Altar worshippers and visitors and are tracing possible additional contacts through mobile phones.

Another 43 cases were confirmed Wednesday afternoon.

There is the possibility of further community transmission as some of the infected students were confirmed to have been attending two other cram schools as well.

Victory Altar has been conducting regular services since Jan. 18.

Victory Altar issued an apology Wednesday on its website and said it plans to comply with efforts to prevent any further spread of the virus.

The daily infections were the highest since 451 cases were reported on Feb. 4 and compare to 289 new patients Sunday, the lowest since Nov. 23. 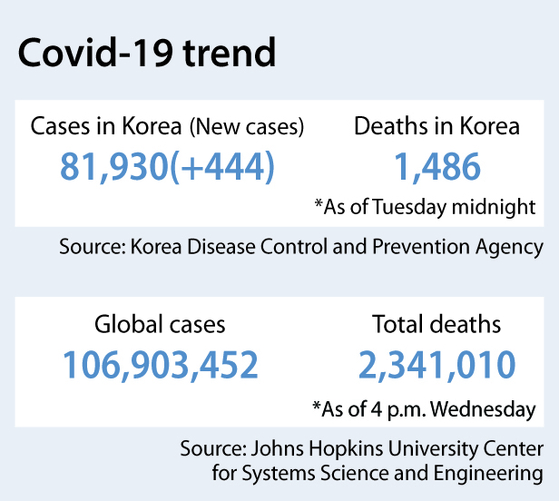 The 30 new imported cases included nine cases from Europe, three from Africa, five from the United States, three from Indonesia and two from India.

The KDCA said Wednesday it will require all incoming travelers including Koreans to provide negative polymerase chain reaction (PCR) test results to enter the country starting Feb. 24. All visitors will also need to get a PCR test when they arrive in Korea and another test after they are released from a two-week quarantine.

The government urged people against traveling over the Lunar New Year holiday, which runs from Thursday to Sunday, over worries that infections, largely concentrated in the Seoul metropolitan area, could spread across regions.

Prime Minister Chung Sye-kyun said Wednesday, “The Lunar New Year holiday, which begins tomorrow, is an important crossroads for the Covid-19 situation. The third wave, the most critical one to date, could end, or its dying embers could flare up again.”

The greater Seoul area is currently under Level 2.5 social distancing measures, the second highest in a five-tier system, while Level 2 has been implemented for regions outside of the metropolitan area. The government has banned gatherings of five or more people, extending this measure through the Lunar New Year holiday, and restricting the operating hours of restaurants and other businesses to 9 p.m. in the greater Seoul area.

As it did for the Chuseok holiday, the government will be charging expressway tolls and banning indoor seating at expressway rest stops to discourage people from visiting relatives or traveling outside cities.

Before the pandemic, the government customarily waived expressway tolls over major holidays to make traveling cheaper.

The Seoul Metropolitan Government will not be extending operating hours for public transportation.

Cities and provinces will be operating Covid-19 testing centers through the holiday as well.

But the government is set to review its social distancing guidelines Saturday as small-business owners, especially those in greater Seoul under stricter operating hour restrictions, have been protesting the ongoing measures.