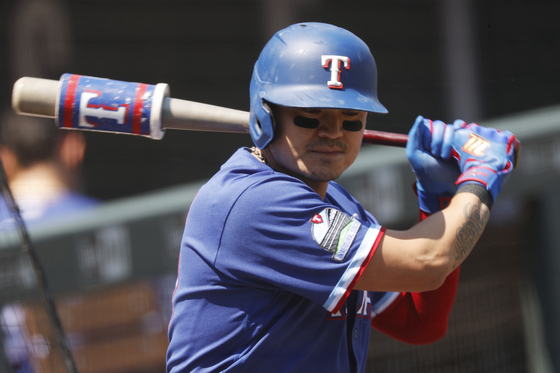 Choo Shin-soo of the Texas Rangers waits to face Colorado Rockies starting pitcher Jon Gray in the first inning of a game on Aug. 16, 2020, in Denver, Colorado. [AP/YONHAP]


Free agent Choo Shin-soo is reportedly gaining interest from a number of MLB clubs, with the Philadelphia Phillies, Milwaukee Brewers and Colorado Rockies all linked to the veteran slugger over the last few days.

After seven seasons with the Texas Rangers, Choo became a free agent at the end of the 2020 season. With the off-season winding down and spring training set to start at the end of February, Choo is yet to sign with a new team for the 2021 season.

The Phillies were first linked to Choo last week, when Dave Dombrowski, president of baseball operations for the club, told reporters that he is happy with the team's current squad but is looking to improve, possibly by bringing in some veterans to add strength and experience to the lineup.

Choo is reportedly among the three players the Rangers are potentially looking at, alongside switch-hitting utility player Marwin González, formerly of the Minnesota Twins, and infielder Brad Miller, who formerly played for the Phillies before moving to the St. Louis Cardinals last year.

CBS reported over the weekend that Choo has been working on his versatility, potentially positioning himself as a possible pick for first base. MLB rumor website FanSided has reported that a number of National League teams are looking at Choo, with the Brewers mentioned as an option, possibly at first base, although he could also be brought in to play as a pinch hitter or occasional outfielder.

Another possible National League fit for Choo could be the Rockies, where he could try his hand at first base, or play as an occasional outfielder, a position he's more comfortable with. If the National League had a designated hitter for the 2021 season, which doesn't currently seem to be on the table, Choo might have had more options with either the Rockies or the Brewers.

Choo is the most established Korean playing in the major leagues, having chosen to head straight to the United States rather than first plying his trade in the KBO. Over 16 seasons in the big leagues, he has played for the Seattle Mariners, the Cleveland Indians, the Cincinnati Reds and the Rangers.

Choo has made it clear that he isn't ready to retire yet, but the clock is ticking if he wants to find a new MLB home before spring training begins.